Last summer, our granddaughter visited a couple of times for two different two-week visits, and I organized simplified operating schemes for her to do. My wife volunteered to fill out the crew. She has often been a little puzzled when four people (mostly men, some women) would show up and operate on the layout for three or four hours. I don’t mean she didn’t know what we were doing, she just wasn’t clear on whether and why it was fun.

I wrote about the sessions in the summer in previous posts. The first one, about July sessions, pointed out that at least family can participate in operating sessions even in the pandemic. That post can be found at this link: https://modelingthesp.blogspot.com/2020/07/pandemic-operating-sessions.html , while the following pair of sessions in August are here: https://modelingthesp.blogspot.com/2020/08/another-family-operating-session.html .

This Thanksgiving proved to be a long weekend, with my son bringing his daughter down on Tuesday, and staying until Sunday. There were lots of activities, but we did manage to have another operating session. As before, I just set it up for one side of the layout, this time at Shumala, and on this visit, we only had time for that one session. It would be the 57th session on the layout in its present form.

Our granddaughter is now almost nine, and is pretty experienced with an NCE throttle, so I trust her to be a more than competent engineer. She has tried being the conductor, but found the waybills a little daunting, so again this time, my wife was the conductor and planned all the moves.

In this first photo, below, the conductor is still organizing. (You can see a number of waybills leaned up against cars in the foreground, something I don’t mind when the conductor is making sure that all the active cars have been identified, but which I discourage once the session gets underway.) The engineer is standing on a step-stool for a better view. 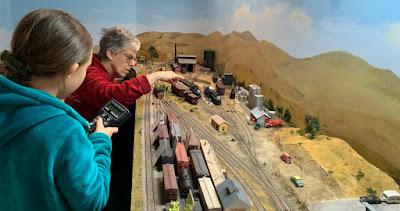 As the session proceeded, we did have a few snags. A coupler pulled out of a coupler box, and that car had to be set out for repairs. And a brass car happened to be temporarily stopped on a gap, and promptly shut down the DCC with the resultant short. It didn’t take long to find the source (the most recently moved car), and we proceeded.

A complex set of moves at East Shumala did challenge the crew, with two pickups and four set-outs, but they worked carefully and got it right. Here they are, comparing the agent’s message with the waybills for each of the cars identified in the message. They understood the guidance, that we weren’t in a hurry and they should take their time to understand all the moves. You can see their switcher, and its string of cars, on the main track near the layout edge, ready to go and work at East Shumala (mostly hidden behind and to the left of the crew). 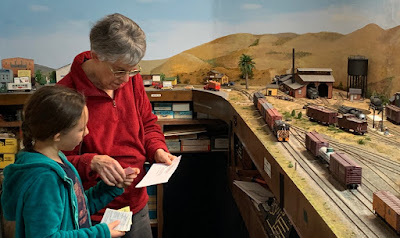 The session went well, all moves called for in the set-up of waybills and car spots were carried out properly, and a good time was had by all. Can’t beat that for a holiday weekend afternoon, pandemic or no pandemic.

Posted by Tony Thompson at 1:42 PM