I have from time to time described the ways I operate my layout to convey the larger railroad of which it’s a part (the Southern Pacific’s Coast Route). The main activity on the layout is the Santa Rosalia Branch, but since a portion of Coast Division main line is included, I try to provide activity there to reflect the SP’s traffic.

Some time back I mentioned how the mainline trains on my layout are used for this purpose, with a variety of power and consists to suit the situation. That post included mention of automobiles and auto parts (see the post at: https://modelingthesp.blogspot.com/2017/10/the-role-of-mainline-trains-on-branch.html ).

It’s known that the automobile-industry traffic was important on the Coast Route, as shown, among other places, by the SP’s “Condensed Perishable, Merchandise and Manifest Train Schedules” (described in an earlier post: https://modelingthesp.blogspot.com/2017/09/modeling-freight-traffic-coast-line.html ). In later years, these schedules were in the form of booklets like this one (title slightly changed): 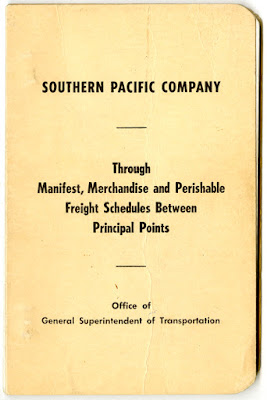 But schedules only tell you about the trains. The traffic in them reqires more information.  I have provided a detailed look at some of the prototype sources of much auto industry traffic in a previous post (that post can be found at the following link: https://modelingthesp.blogspot.com/2017/12/understanding-auto-industry-traffic.html ).

Here is an example of an eastward train (likely the “Los Angeles Manifest” train, symbol LA, as identified in earlier posts), emerging from the tunnel just outside Shumala. The time is late morning, and the train number is 914. This train moves mostly loads of auto parts, that arrived via the Overland Route into the Bay Area yesterday, and are en route to Southern California auto plants. 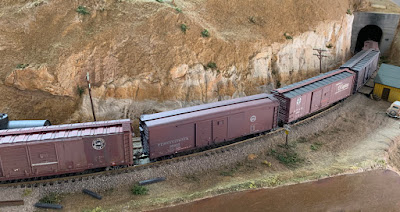 Consists like these allow me to operate the several varieties of automobile box cars that I have on my freight car roster, particularly the 50-foot variety. I have described my approach to creating this roster in a post that was part of a series about my entire roster, including comments on traffic (the post is here: http://modelingthesp.blogspot.com/2011/02/choosing-model-car-fleet-4-automobile.html ).

The same train was also photographed just passing the Shumala depot. as you see below. The auto cars in this view are all 50-foot double-door cars, but I vary this group of cars by including 50-foot single-door cars, and 40-foot double doors (the latter two types primarily in auto parts service). Some of these cars may contain partial loads, if partly unloaded at Bay Area auto plants, before completing their journey at Southern California plants.

It’s worth mentioning that these loaded auto parts cars, en route to Los Angeles, are mirrored in the opposite direction by empty auto cars returning along their service route to be reloaded. The companion westward train of this type to the LA Manifest was the San Francisco Manifest (SF). I operate an SF in some operating sessions, normally a late afternoon train but sometimes ending up moving earlier.

The photo above portrays this “other side” of the LA Manifest that was shown in the first photos above, and its auto cars here at the end of the train, passing Shumala, are a mixture of 40-foot and 50-foot cars, and one single-door car. In this direction, most cars are empty, on the way to be reloaded.

These two trains, the LA and the SF, were the “hot” or through trains. The SP had essentially two types of manifest freights, those that operated straight through to the destination area (such as the LA and SF that I have shown here), and other manifests that picked up additional freight cars at intermediate points (Watsonville Junction, San Luis Obispo, Santa Barbara). These were the Coast Line Manifest (CLM) eastward, and the Golden Gate Manifest (GGM) westward.

So among other features, these “general freights” could well include lower-priority cars, such as empty gondolas. Accordingly, I sometimes operate at least one train that could be called “general freight,” that is, a manifest train of lower priority, with a corresponding consist. All these mainline trains contribute to the identity of the Coast Division main track on my layout.