In a previous post, I showed elements of Southern Pacific’s “Condensed Perishable, Merchandise and Manifest Train Schedule No. 15,” published for Pacific Lines, which went into effect on March 5, 1954, thus very close to my 1953 modeling era. The post is at: http://modelingthesp.blogspot.com/2012/01/modeling-freight-traffic-coast-line.html . That post covered mainline freight trains, except perishable schedules, and I discussed the complexities of perishable traffic in a separate post, which can be found at: http://modelingthesp.blogspot.com/2011/01/modeling-freight-traffic-coast-line_17.html .
It is interesting to compare those 1954 listings with later schedules, for additional insight into some of the trains. The Southern Pacific Historical & Technical Society magazine, Trainline, recently published the entirety of Timetable No. 17, of June 23, 1957. (It is in the Trainline issue for Spring 2017.) Here is the header for that document (you can click to enlarge):

These schedules in that period were on a single large sheet of paper, about 17 x 22 inches. The Coast Route part was only a small section of the total.
The Coast schedule itself, like those for each Route, was presented in ordinary timetable fashion, giving the times at only a few principal points, though in fact these listed times were only “guidelines,” not rigorously timed schedules. 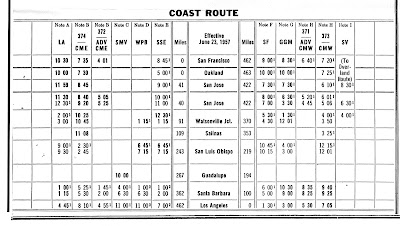 The real meat of this information is in the so-called Notes, at one side of the schedule, which describe actual train goals and operation for each Route. These notes are the core of what we want to learn as modelers of prototype operation. Much of this material is like the Notes for Schedule 15, on which I have commented in that previous post (see paragraph at top for link). Here are the Schedule 17 Notes. 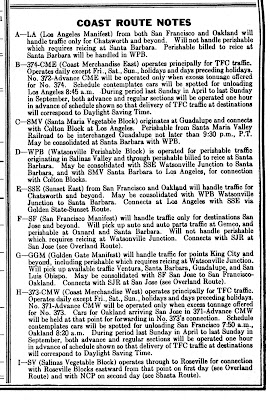 The interesting point here is to compare this information from Schedule 17, to that in the Schedule 15 I showed in that earlier post (see link in first paragraph, above). Nearly all the trains remain the same, with the same symbols, though the MM and MX of Schedule 15 have gone, and now the “Overnight” has a companion “Advance Overnight” as well.
More interesting, perhaps, is that the schedules of some trains are significantly speeded up. The general or manifest trains were the LA (Los Angeles Manifest) and the Sunset East or SSE eastward, and the GGM (Golden Gate Manifest) and SF (San Francisco Manifest) westward. The LA has been greatly speeded up in Schedule 17, compared to No. 15, and now is described as handling auto parts and automobiles out of Gemco in Van Nuys. But the other train Notes remain much the same, though departing and arriving in entirely different parts of the day.
The more important point is that in either schedule, there were trains that took many hours to traverse the route between Los Angeles and San Francisco. The Daylight could cover this route in a little under 10 hours, but there were freights scheduled to take fully 30 hours. There is an image in the popular imagination of the “red ball” freight, thundering over the road with vital cargo, hitting every station with split-second precision. On the Coast Route, the two Coast Merchandise trains, CME and CMW, perhaps fit this description; these were the trains nicknamed “Overnights.” But the manifests on the Coast Route were practically the opposite.
Back in 1953, all four manifests (LA, SSE, GGM and SF) had very long schedules, and each had at least one intermediate point where the train was scheduled to be for hours. For example, for the SSE and GGM, it was 5 to 8 hours at San Luis Obispo; for the LA, 4 hours at San Jose and 2 hours at Watsonville Junction. All four trains are faster in 1957’s Schedule 17, though only the LA is significantly faster.
Of course these station times were for switching and re-blocking the train, perhaps setting out some cars and collecting blocks of others. At San Luis Obispo and Santa Barbara, and sometimes also at other points, power and cabooses would be changed and crews changed. But the point is, these were not “hot” trains in schedule terms.
I have described all these freights in previous posts, based on the timetable instead of the Manifest Freight Schedule. For example, this one: http://modelingthesp.blogspot.com/2011/01/modeling-freight-traffic-coast-line.html . This is the kind of information I like to have in designing operating patterns, even though I don’t directly model the change in train numbers at San Luis Obispo. Anyone researching comparable mainline freight operations might likewise find it essential to try and understand actual freight schedules.
Tony Thompson
Posted by Tony Thompson at 10:46 AM