The marvelous TSG video of Jack Burgess’s layout, and incorporating an extensive interview with Jack, is well worth viewing for anyone who hasn't seen it. It can be purchased as a DVD for anyone who would like to own it (you can visit TSG Multimedia at: https://tsgmultimedia.com/product-category/dvds/ ), and the full 43-minute video can also be viewed on YouTube (here is a link to that video: https://www.youtube.com/watch?v=EHGkZHLqALY ). Jack’s re-creation of the Yosemite Valley Railroad deserves attention from everyone.
What does that have to do with my post title, about punch lists? About six and a half minutes into the video, Jack describes having responded to the then-upcoming NMRA National Convention of 2011, to be held in Sacramento, with the thought that he ought to get more of the layout done for visitors. When he looked over his list of remaining things to be done, he realized he could complete it all, and found himself one day checking off the last item on his to-do list. At that point, as Jack puts it, the layout was done.
This made me think a bit. Not because my layout is that close to done, but it’s not extremely far off either. I do write punch lists from time to time, but usually ones that are conceived far more narrowly. That raised the possibility of seeing if a list like Jack’s was practical: everything I want or intend to do to complete the layout.
Like most people, often when I’m busy I will jot down an “immediate“ list to work on. It might look like this recent one: 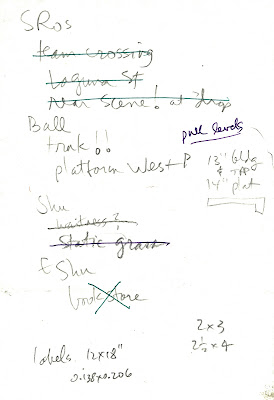 You can see that I have written various things on the list after it was first made, everything from crossing out the tasks already done, to adding more tasks, along with some dimensions on something that I already forget what. This is an “everyday” kind of list, familiar to practically everyone.
I have long maintained (and of course updated) a longer-term list of things I would like to get done on the layou. This is kind of a running list of things I need to do, but not immediately. Here is an example of a past list, which happens to be from November 2014, 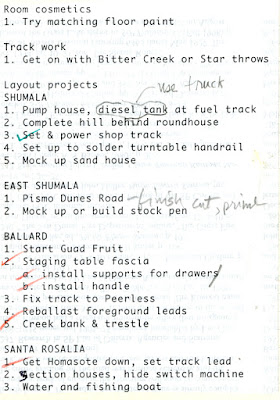 More of the tasks on this list have now been completed, beyond what is crossed out above, in the time since I last used it to direct my work on the layout. But even as an old list, it illustrates the point.
But whether current or not, this is a very long ways from a “finish the layout” punch list. That may come down the pike one of these days, but right now I have lots still to do, and feel no urgency to do so. Much as I admire Jack Burgess — and his ability to declare his layout “done” — I am by no means close to reaching that point, and I don’t foresee a punch list like Jack’s anytime soon. And since I host several operating sessions a year, the layout is already doing its most important job — serving as the foundation for realistic 1950s SP operation.
Tony Thompson
Posted by Tony Thompson at 9:34 AM