Having had a few questions over the years about switching districts and reciprocal switching, I posted a description and explanation of several aspects of reciprocal switching in Part 1 of this series. (You can read that post at this link: http://modelingthesp.blogspot.com/2017/08/whats-switching-district.html .) In the present post, I want to explore some aspects of this topic further.
I showed a page from a tariff book in a prior post about resources, and it was a page listing the industries in a reciprocal switching district in Norfolk, Virginia (that post can be found at: http://modelingthesp.blogspot.com/2017/08/waybills-part-60-more-about-resources.html ). These districts, of course, were everywhere in the U.S. To cement that statement, here is a page from the Western Pacific document I described awhile back (see that post at: http://modelingthesp.blogspot.com/2016/11/waybills-part-56-western-pacific.html ), for Oakland, California. In that prior post is page 52 of the document, including the Oakland abbreviation key. Below is page 57. (You can click on the image to enlarge it.) 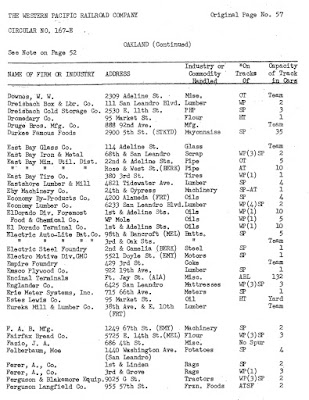 Note the various railroads identified (OT = Oakland Terminal, HT = Howard Terminal, ABL = Alameda Belt Line, ATSF, abbreviated AT, SP, WP; no SN on this page, though appearing elsewhere in the Oakland listing). The numbers in parentheses identify WP switching zones in the Oakland area. A few Oakland-area substation names are also given (ALA = Alameda, BERK = Berkeley, EMY = Emeryville, FRT = Fruitvale, MEL = Melrose, STKYD = Stockyard).
Given the variety of railroads shown, this Richard Steinheimer photo from Oakland in 1953 might represent a car being moved by an SP 0-6-0 under reciprocal switching, though the location is so near West Oakland yard that it could be a yard move. The photo, taken from Magnolia Tower.  is used with permission from the DeGolyer Library. 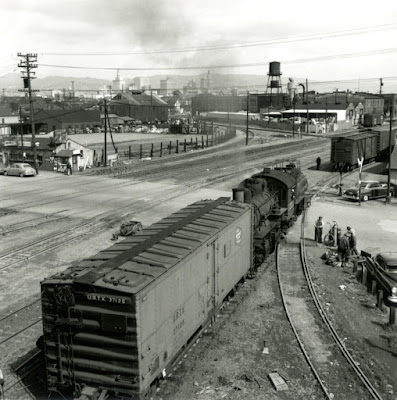 One can naturally ask what special paperwork might be associated with car pickup or deliver within a reciprocal switching district. Answer is, not much. You may recall from the first post on this topic, that the line-haul railroad prepares the waybill. That means that an industry such as the Eldorado Division (previously El Dorado Oil Company), shipping vegetable oils and located on the WP, might have a tank car of oil moving on an SP waybill if the SP were to handle the transportation service. At the time I model, El Dorado was still independent, not yet taken over by Foremost Food and Chemical of Oakland, so my waybill might look like the one below. There is no sign in this paperwork that the El Dorado Oil spur is part of the WP, as we saw on page 57 of the WP Guide. 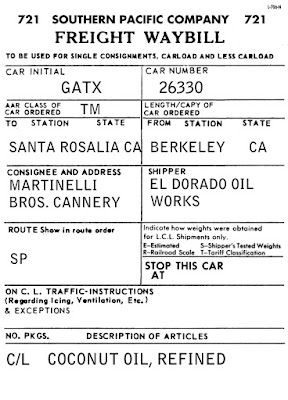 Some readers may remember that I have made a model of a General American tank car leased to El Dorado, based on a prototype photo by Wilbur C. Whittaker. I showed the model in a previous post (see it at: http://modelingthesp.blogspot.com/2011/01/tank-car-projects-for-cocoa-beach-2.html ), and also wrote it up in an article for Railroad Model Craftsman magazine, in the issue for July 2011.
In the other direction, a load inbound to a reciprocal switching district would likely not identify the road performing the final switch; that road simply acts like a terminal railroad. It has no share of the line-haul revenue and its switching charges and per diem reclaim are paid by the line-haul railroad, as I explained in Part 1. The only place one might think special paperwork would be used would be for the railroad supplying an empty for loading to use its own Empty Car Bill. But that could readily be used (or replaced) by the switching road. I will consider this further in a future post.
If for no other reason, it is helpful to understand how reciprocal switching works, so that when confronted with any railroad’s Shipper Guide, you know what it means for industries to be located on one railroad’s system but be in a reciprocal district, thus able to have its loads waybilled by a different railroad. Whether you have the space or inclination to include such a district in a model railroad is up to you.
Tony Thompson
Posted by Tony Thompson at 10:31 AM