There have been rumors swirling around for some time, at least in the Southern Pacific modeling community, that the “Harriman” flat car was finally going to be produced. A couple of resin kit producers were said to be considering the car, as were at least two producers of injection-molded styrene kits. But reality has finally arrived, and it is Jason Hill, of Owl Mountain Models, who has actually gone ahead to complete this project. I have just received a pre-release kit, and want to describe it in this post. My main goal is to make readers aware of this new kit, and only secondarily to offer a few comments about how the kit builds.
The kit release is “imminent,” probably within a week or two. But the way to find out the actual release is on the Owl Mountain website, which can be found here: http://www.owlmtmodels.com/OMM_Aug_2017_News/OMM_August_2017_News.html . Right now it just shows news about the kit, but will soon have both an official release date, and also information on how to order kits.
I will start by showing below a typical flat car of the type modeled in the new kits, SP 38892, a Class F-50-8 car built for Pacific Electric in 1923. (The 126 surviving F-50-8 cars were transferred to SP in 1951 and numbered into the 38840–38985 series.) The car was photographed in San Diego by Chet McCoid in September 1954, and the photo, from the Bob’s Photo collection, is used with permission. Clearly visible here is the wood blocking under the edges of the deck.

Packaged with the new Owl Mountain kit is a nice summary of the prototype history, well abstracted from a book on the subject by some guy named Thompson. (To be more precise, Southern Pacific Freight Cars, Volume 3: “Automobile Cars and Flat Cars,” Signature Press, 2004.) There were some 4100 cars built to this basic design, starting with Class F-50-4 in 1910 (eventually 1800 SP cars, including 250 for Atlantic Lines, and 300 UP cars).
The single-center-beam Bettendorf underframe design of Class F-50-4 had problems in service, so subsequent classes had double center sills. There were five more classes of these cars built after the F-50-4 cars. These five later classes can be divided into two groups: first, the cars of classes F-50-5, -8 and -9 (1650 cars, including 575 for Atlantic Lines) and a second group, classes F-50-10 and -12 (950 cars). These two groups differed most visibly in a change from T-section trucks to ARA cast-steel sideframe trucks.
But the design of the straight side sills, with distinctive wood blocking under the overhanging deck, continued in use through the last such flat cars, Class F-50-12 in 1929. In fact, it is evident that all these later cars were built to the same fundamental design, because all were built to the same Common Standard specification, CSF-307. Thus the fundamental Harriman Common Standard design of Class F-50-4 continued in use for almost 20 years, justifying the use of the “Harriman” name for all these cars.
Owl Mountain is introducing kits for all three of the variations among these cars: kits 2002 and 2003 are being released first, for the two groups within the five later classes. Kit 2001 for the Class F-50-4 cars, with a different center sill, will be released later. Below is their ad which will appear in the October issue of Railroad Model Craftsman. (You can click on the image to enlarge it, if you like.)

Here is the kit as it is supplied, stapled in a plastic bag. 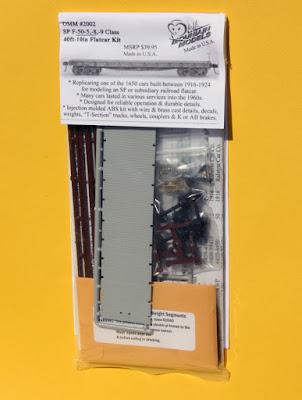 The brown envelope visible in the kit bag contains precision-cut lead weights, and these are designed to hide neatly inside the underframe; they bring the car weight to around 3 ounces, a most welcome feature.
Opening the kit, there are four sprues, one in gray plastic, which is the plastic deck, and three in boxcar red (one comprising the underframe parts, the other two the side sills, and a variety of detail parts). There are also trucks, the lead weights just mentioned, a set of decals, and a small bag of detail parts, including some excellent brass parts, and Kadee couplers. Directions are detailed and very clear, with numerous drawings showing how parts go together. The assembly process is well thought out, and easy to follow.
This post is only intended as an announcement of the kit’s release. But to get some feel for how well it goes together, I decided to go ahead and start the construction. I won’t describe that process here, but will reserve it for a future post. I can tell you, though, that the precision kit parts go together beautifully, reminding me of the better Tichy kits. Do read the instructions carefully, especially regarding what not to file off. The kit has several “locator” parts that must be left in place, well identified in the instructions.
This kit makes up into a car that is a long-needed part of the Southern Pacific freight car fleet. I would expect that many SP modelers of the period before, say, 1956 will need more than one of these cars. You will enjoy building every one.
Tony Thompson
Posted by Tony Thompson at 10:23 AM