This topic has arisen a couple of times in questions to me, both directly to the blog posts, and also coming to me personally. One example is the question appended to a recent post in the Waybill series (you can read it at this link: http://modelingthesp.blogspot.com/2017/08/waybills-part-60-more-about-resources.html ). So I thought I would try and explain — and if I don’t get some of it right, I hope experienced railroaders among the readers will correct me.
Any railroad, back in the transition era, could and usually did designate particular areas as “switching districts.” Such a district would normally be an area such as a town or city, so that shipments to or from any point in that district would move at the same rate. Then one can distinguish between “switching service,” car movement anywhere within the district, and “transportation service,” movement of cars from one town or city to another, perhaps all the way across the country.
But what is of more interest is a district of this type in which two or more railroads, both serving the town or city area, agree to a “reciprocal switching agreement” within that district. This is sometimes explained as the roads essentially saying, “We will switch your cars if you will switch ours.” Although in principle these arrangements were to be subject to ICC approval, ordinarily there was no problem with such an agreement.
Let’s see how this would work, using two railroads called A and B. Some shipper within the territory of the city served by A chooses to route his shipment over B, even though his siding is switched by A. This means B will get the freight revenue for its part of the line-haul or mainline distance that the load travels, and normally B will supply the empty to be loaded. That empty might be a car owned by B, or even more likely a car owned by some distant railroad, which I will call H. So the empty owned by H is interchanged by B to A, for movement by A to the shipper’s siding. After loading, the reverse occurs, and the loaded car is interchanged back to B for departure to destination. And incidentally, the waybill for this shipment will have been prepared by railroad B.
What does A get out of this? It does not participate in the freight revenue from the line-haul or transportation service, so gets nothing from the eventual freight bill. But it is entitled to a switching charge for its work. Switching charges were computed on the basis of crew time, fuel consumption, and other costs, and are mutually agreed as part of the reciprocal switching agreement. Note also that during the time that the car from railroad H is on the rails of A, per diem costs will have to be paid by A. Here again, A can recover part or all of this per diem from B, in what is called a “per diem reclaim,” so that A is not paying too much for the switching process. Here again, the amount of reclaim is part of the mutual agreement for the reciprocal switching district.
Here is a statement of the basic reclaim rule, from the AAR Code of Per Diem Rules, in Rule 5:

5. An amount for each car in switching service may be reclaimed by each individual switching road from the road for which the service was performed. This amount shall be based upon the average time required by the switching road to switch cars for all roads, and determined by the roads directly interested for each local territory.

So why would railroad A put up with all this? Their reimbursement for the switching work and per diem may not cover all their costs. But the benefit to A is that they have access to, and can try and recruit, shippers on the lines of B, just as B can solicit shippers on the lines of A. The rates are the same, so in this pre-Staggers Act scenario, there is no rate competition. The two roads have to compete on the basis of service or other factors. And a reciprocal switching agreement often saves time for both A and B.
And how about B? It has to pay A a switching charge and per diem reclaim, which cuts into its revenue from the shipment. But it too has the ability to solicit traffic from A’s industries, a mirror image of A being able to solicit on the rails of B.
It is important to recognize that the biggest part of railroad revenue was from moving loaded freight cars in transportation service. Per diem, switching charges, and many other small costs were minor expenses compared to the revenue of line-haul freight movement. So what a railroad really wanted was shippers using its tracks, even if some moderate costs might be incurred by participating in a reciprocal switching district.
One place you can read more about these issues is in John Armstrong’s superb book, The Railroad – What It Is, What It Does (Simmons-Boardman). It was originally published in 1978, now is in its 5th Edition from 2008, and is still available new from the publisher on their website: http://www.transalert.com/cgi-bin/details.cgi?inv=BKRRNN&cat=18 . This is a great resource even if you know quite a bit about some aspects of railroading, because this book gives you the background for those areas you don’t know as well. And if you want to get the earlier editions as a better window into earlier times, they are readily available from online booksellers such as AbeBooks.
If you want to learn really a lot about this subject, albeit at the cost of some intense reading and thinking, you can find it all in The Freight Traffic Red Book, published by the Traffic Publishing Company, New York, in annual editions. I have a copy of the 1940 edition, an 8.5 x 11-inch book. 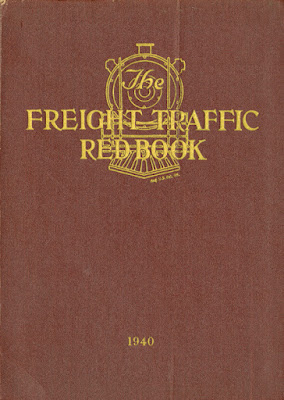 It contains 1316 pages, much of it citing actual AAR, ICC and other rules, along with interpretations and explanations, It’s a highly informative book, but probably not the place to start learning about anything. Google has digitized the first edition, from 1920 (it’s at: https://books.google.com/books/about/The_Freight_Traffic_Red_Book.html?id=qRopAAAAYAAJ ). The books continued to be published at least as late as 1955. They can often be obtained from online booksellers.
I  know these levels of detail are not of much interest to most model railroaders. But I like to understand how railroading was done in the era I model, to support my goal of reproducing as much of the operations and language of the period as I can.
Tony Thompson
Posted by Tony Thompson at 8:15 AM