In the long series of posts I have been creating about waybills, I have alluded in passing to many resources for those seeking more information. Those posts are readily found using the search box at right, with the broad search term “waybills” or the narrower topic, “waybill resources.” The principal post, and one in which I showed essential books as well as the copy I have of a freight tariff, can be found here: http://modelingthesp.blogspot.com/2012/02/waybills-18-resources.html .
I occasionally get questions from modelers about finding still more resources, and I often comment that you need to use your imagination and guess what items might be out there at libraries and archives, or for sale on auctions such as eBay. In fact, browsing eBay for railroad paper can be quite informative. But there continue to be really excellent items of railroad paper that float through your field of view, if you are just attentive.
I will include here two examples, both originating from the Pennsylvania Railroad, that I obtained in the Pittsburgh area. Both concern switching districts and tariffs, and are endlessly fascinating, at least to me. The older of these, that went into effect March 1, 1955, contains a list of industries, though not extensive. It just covers the Pittsburgh Switching District, intense as that was. 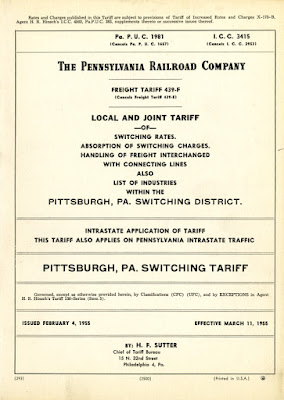 There is a great deal of information in here about switching rates and handling of switching charges between railroads, and not so much of what modelers might like to read, about the industries and industrial districts.
The second item is also a switching tariff listing, but from 1968. Its cover is shown below, and as clearly indicated, it if for a number of eastern states in which the PRR operated. For this tariff, these were Delaware, District of Columbia, Maryland, New Jersey, New York, Pennsylvania, Virginia, and West Virginia. 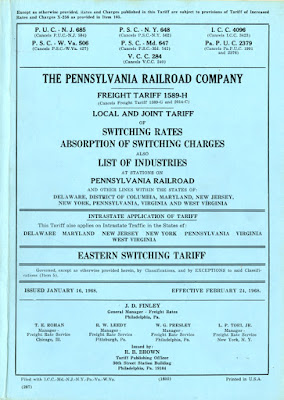 It also differs in having considerably more information on industries. As is often true in such tariffs. all are listed by city, and all other railroads in each respective switching district. Below is an example page, for Norfolk, Virginia. Note that connecting, joint switch railroads included N&W, C&O, and N&PBL (the Norfolk & Portsmouth Belt Line), along with NS, which is of course the original Norfolk Southern, not the later entity incorporating N&W and Southern. (You can click on the image to enlarge it.) 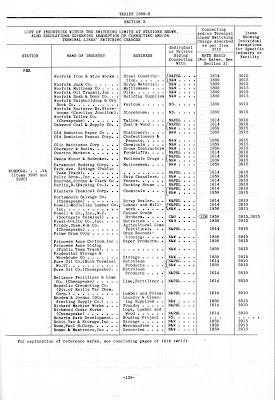 These listings are not comprehensive, that is, they do not necessarily include all industries in a particular town or city, only the ones that fall within a switching district. These districts were created by mutual negotiation and agreement among the participating railroads.
But limited or not, this is a rich source of prototype data. This kind of information is so valuable for the person creating waybills, it is difficult to overstate. I personally work through these books frequently, looking to match shippers with my on-line layout industries, as well as to identify consignees which my layout industries might ship to. For me, it is part of the fun.
Tony Thompson
Posted by Tony Thompson at 8:47 AM