In a four-part series two years ago, I described several approaches I have been taking to model highway trucks, both van or box trucks and also semi-trailers. Here is a link to the fourth of those posts, and you can track back through the series, with each post containing a link to prior ones: http://modelingthesp.blogspot.com/2015/07/modeling-highway-trucks-part-4-more.html , if you are interested. In the present post I want to address one particular aspect of such modeling: including local owners.
I raise this point because so many commercial models of van trucks and semi-trailers are decorated for familiar brands and companies, well-known regionally or nationally, whether Coca Cola or Carnation Milk or Rath Meats or Schlitz Beer. These are fine, of course, and represent, in a way, another angle on the “beyond the basement” feature of a model railroad, suggesting the presence of those recognizable brands even on the little piece of the planet represented on your layout.
But if you look at passing trucks in your own neighborhood, town or city, you will see that a majority of the trucks actually have local owners, and serve those local businesses as delivery or, in some cases, pick-up vehicles. I alluded to this point in my prior posts, though briefly. Here is a photo of one example, a delivery truck from my wholesale grocer, Peerless Foods, heading up Bromela Road in my layout town of Ballard. (You can click to enlarge.) 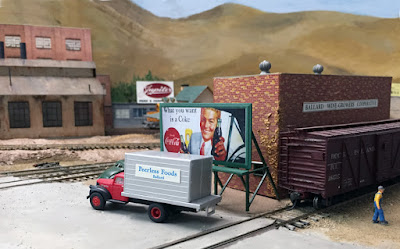 And my interest in having such vehicles on my layout is not only to remind visitors of those on-line businesses, but almost more importantly, to serve as a “scenic link” to industries which are not modeled on the layout. These are businesses which are rail-served via house tracks and team tracks, and have to send a vehicle to pick up the cargoes delivered in that way.
[Before going any further, I should mention that these ideas are by no means original with me. I have shamelessly lifted them from a great article by Paul Dolkos, which appeared in a Special Issue of Model Railroader magazine, entitled “How to Model Railroads of the 1950s,” published in Summer 2011. (That issue is still available from Kalmbach, at their online store: https://kalmbachhobbystore.com/catalog/special-issues?page=4 and is well worth acquiring if you don’t already have it.) Paul’s article is entitled “Trucks drive home your layout’s era,” a sound point to make, but more importantly he shows several example of the kind of local delivery trucks I am writing about in this post.]
Turning from delivery trucks, such as the Peerless truck shown in the photo above, to examples of trucks making pickups, I show below a truck of Ballard Farm Supply, a company which receives a variety of materials and equipment via the house track and team track in my layout town of Ballard, though there is no siding for this business. The truck is shown at the Ballard team track. 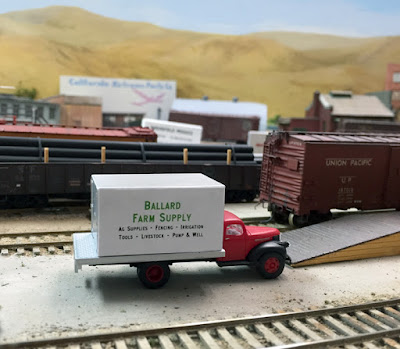 Of course, there can also be trucks from not too far away, even though off the layout, and again, these would commonly not be marked for national brands. Here is an example at my wharf along Willow Lake Road, with the truck backed up to unload. The view is right past the Santa Rosalia depot. (You may wish to click to enlarge.) 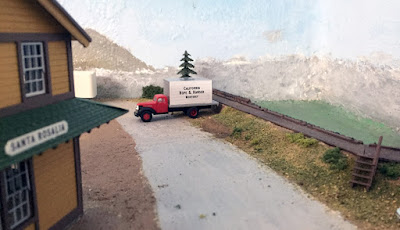 All these examples are conventional trucks. I have also made up a tank trailer for road asphalt, with two different company owners, one on each side (thereby getting two off-line industries with one trailer!). Such a trailer can be spotted alongside the team track in the appropriate town, obviously waiting for this tank car of asphalt to be spotted. The company name here is a familiar regional one, at the Shumala team track. 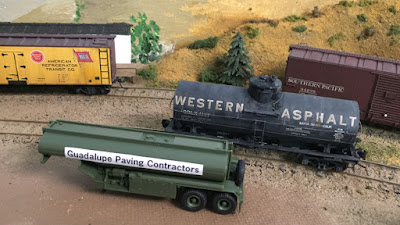 Below is the other side of that trailer, using a different company name. There was once a construction company with this name in San Luis Obispo county. 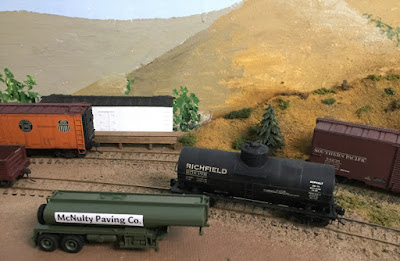 The switch crew understands this trailer when they see it, because they have this waybill: 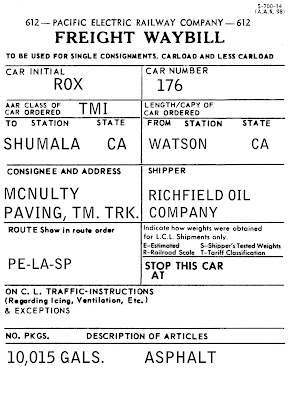 Each of these ways of using trucks or trailers decorated appropriately for local or regional owners adds to the specificity of your layout locale, and, as in the case of the asphalt shipments and of Ballard Farm Supply, even helps your team track make better sense as a destination.
Tony Thompson
Posted by Tony Thompson at 5:53 AM