Was it “just another operating session?”

I have just held two operating sessions, in the afternoons of August 8 and 9, partly so I could have my packing house for tree fruit still operating. That packer is shut down for most of the year, so I really like summer sessions to involve carloadings there. “Wait,” you may say, “why care what month it is?” The reason is because I always treat an operating session as being held on the same date in 1953. Thus the sessions I just held were handled as though happening on August 8 and 9, 1953. That enables me (or, if you wish, compels me) to follow seasonal produce harvests.For background on this idea, you can read a couple of my previous posts (especially this one: http://modelingthesp.blogspot.com/2015/09/seasonality-of-crops-and-traffic.html ).
So these August sessions were fun for me in that I had all packing houses operating. I had also completed some more track ballasting, added some more soil and ground cover, a couple of new streets (as I described in this post: http://modelingthesp.blogspot.com/2017/08/modeling-grade-crossings-part-2.html ), and several additions to buildings and industrial areas. I had even added some static grass in a few areas. Here is the hillside across Chamisal Road from the Shumala depot. 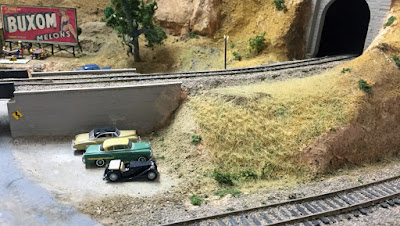 But beyond the layout changes, an additional attraction for me in this session was the chance to introduce several different patterns of freight car movement. I try to vary how things are done in the switching each time the layout is operated, so that each operating session is not simply another set of the same patterns. I managed to do that in several areas in these sessions.
The first day, crews were Jim Providenza (and observer Adam Palmer), Linton von Beroldingen, Ray deBlieck, and Ed Merrin. Shown below working at Ballard are Jim and Linton, with Linton suitably dressed as a conductor, the job he was in fact doing. Adam was just out of the picture. 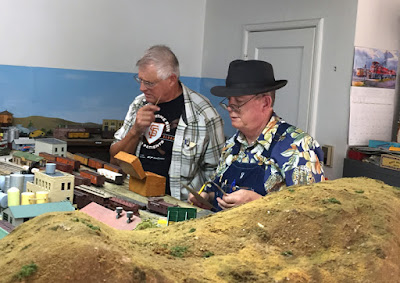 Meanwhile Ray and Ed were hard at work too, switching at Shumala. Ed was engineer on this crew, but appears to be directing Ray’s attention to something vital. 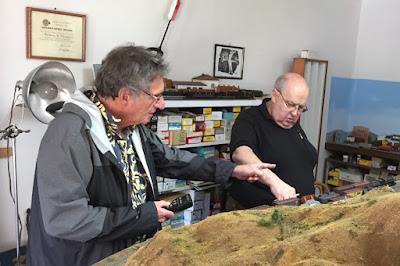 The next day, the crew happened again to be five, Larry Altbaum, Lisa Gorrell, Paul Weiss, Richard Brennan, and Earl Girbovan. Paul and Lisa took turns on the crew with Larry. I didn’t get good photos of everybody, but here are Lisa and Larry, engrossed with a set-out at Ballard. 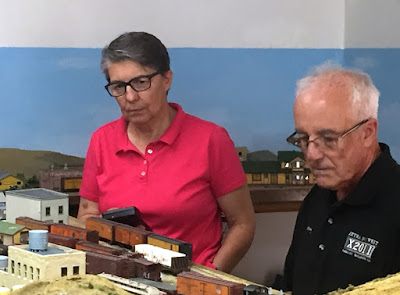 Meanwhile, the team at Shumala was Richard and Earl, shown here in the midst of sorting cars by destination, usually the first job in this yard. 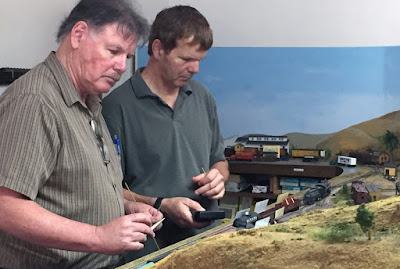 These were fun sessions for me, both to set up and to observe, while these capable visiting operators solved the various switching challenges that go with this branch-line layout. There were a few of the inevitable glitches, all correctable (I believe!), and I’m already looking forward to the next sessions.
Tony Thompson

Posted by Tony Thompson at 3:38 PM