In several prior posts about model figures for layouts (in my scale of HO), I have described some approaches to painting and repainting figures, as well as modifications you can make to some figures (contained in the first five posts in this series; you can use the search term “figures” in the search box at right to find them all). The most recent post talked about placement of figures, that is, effective ways you can position figures on the layout (see that post at: http://modelingthesp.blogspot.com/2017/06/figures-part-6-placement.html ). The present post extends that discussion.
One type of group you can easily represent is workmen (or any kind of people) engaged in conversation, perhaps as a break from whatever work or activity they are doing. The scene below is on the freight platform of my SP depot at the layout town of Ballard. 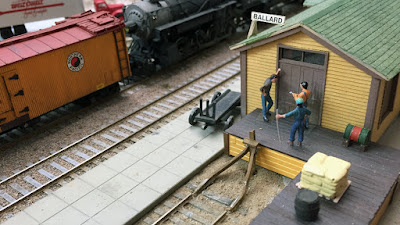 And of course you can always add an obvious bystander, observing the work (I had a neighbor once who loved to repeat the saying, “I love work. I could watch it for hours.”) The observer, or a supervisor, watching the work is a common situation. In the photo below, the supervisor, holding a clipboard, stands at right. You may note that one of the workmen is African-American, as is almost always the case in photos of groups of SP workmen. This scene is at my engine terminal in Shumala, with details described in my recent article in Model Railroad Hobbyist (August 2017 issue). 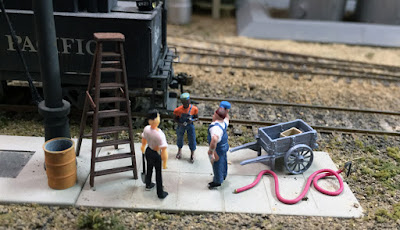 Below is another grouping, at the Shumala depot on my layout. This depot, incidentally, is scratchbuilt, and its design and construction,, following actual SP depot plans, was described in one of my columns in Model Railroad Hobbyist, the issue for November 2012 ; you can read any issue on line, or download it for free, any time at their website, which is at: www.mrhmag.com . These two workmen are handling cargoes unloaded on the freight platform of the depot. The figure on the right is the one I showed being painted in Part 5 of this series (at: http://modelingthesp.blogspot.com/2017/05/figures-part-5-more-on-painting.html ). 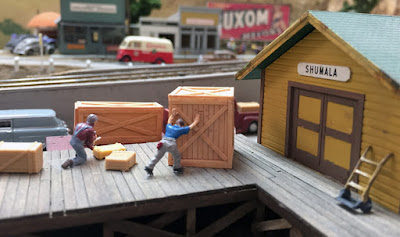 Finally, I showed a grouping at my Shumala tavern, the Dolphin and Anchor, in the previous post (link provided in the first paragraph of the present post). The key to this scene, as mentioned in the previous post, is the picnic tables. Here is a view of one from above.

I have since rearranged the grouping shown previously, with added sitting as well as standing figures. I want the tavern to be enjoying a full group of customers. 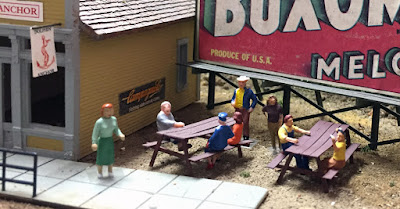 These scenes are intended only to suggest ideas for effective figure placement. My layout has none of the standard “cute” scenes, such as a police car pulling over a motorist, but instead concentrates on attempting to show everyday people doing everyday tasks. For me, it makes for a more realistic layout flavor.
Tony Thompson
Posted by Tony Thompson at 12:18 PM