I have shown and mentioned some of my layout grade crossings in previous posts, but several of them were covered in more detail in the post that, logically, precedes this one (see it at: http://modelingthesp.blogspot.com/2014/02/modeling-grade-crossings.html ). I have done all-paving grade crossings, and ones that combined paving plus railroad ties, as well as a couple of them using ties only. The latter type was shown in a post here: http://modelingthesp.blogspot.com/2015/01/the-road-behind-roundhouse-part-2.html .
I needed some additional grade crossings as I develop my layout town of Santa Rosalia, and I wanted to try a little different approach. For one thing, though prototype grade crossings have the fundamental principle that the crossing is level with, or slightly higher than, the rail head, on a model railroad this is a problem when track is being cleaned (and can be a problem for rolling stock with close underneath clearances). So although some of my other grade crossing are pretty nearly level with the rail, more recent ones are carefully set below the rail height, and I wanted to try to go even a little further with that.
I can remember seeing some prototype grade crossings that were little more than a few planks laid between and beside the rails to provide a minimally uniform height to the crossing. I decided to try and model some of that kind. The prototype naturally uses thick planks, but I decided to use thin ones, just to keep the planks below the rail head.
I chose to use scale 1 x 8-inch Evergreen styrene strip, glued down with canopy glue. These were not tightly fitted, as crossings with much traffic would be, but are simply laid between and outside the rails. Meanwhile, I decided to make some asphalt roadways too. For this, I chose Plastruct ABS sheet, which is already a nice gray color, and the thickness of 0.020 inches fell well below the railhead of this Code 70 track. These roadways were also attached with canopy glue. Here is how it looked, for the road leading to the plank crossings, with planks of white styrene. The building you see is the corner of the Citrus Association. This road will be Laguna Street. 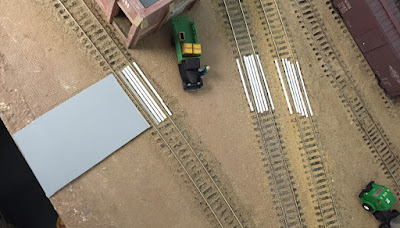 The other road I decided to install was the road that runs between my Richfield oil dealer and the Coastal Citrus shipping warehouse. This street is Corralitos Lane in Santa Rosalia. Here is its original look, with the pavement ending near the track in the background. This road is fairly narrow, more of an alley than a city street, and represents the endmost part of a standard street. 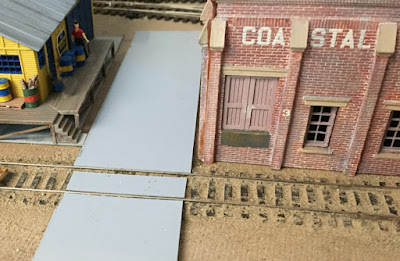 Once the plank crossings were installed, the next step was to paint them a “wood” color. I used Star Brand no. STR-11, Seasoned Brown Wood, as a base color on the crossing planks. I also needed to provide shoulders to the roadways. For that, I used my trusty taxidermists’ paper mache. I have discussed this material before, with its superb fine grain and smooth finish. The one I use is Brandt’s Compound, from Robert Ruozzi of Irwin, Pennsylvania. With that done, here is the project, showing both roads and with the Citrus building removed. 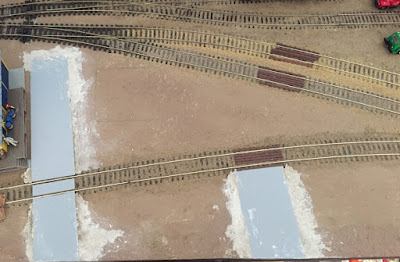 The crossing planks are kind of stark here, too dark a brown color, and will be weathered. The paper mache areas next need to be painted an “earth” color, and I used my usual Rust-Oleum color “Nutmeg” for this. That is the color of the surrounding areas, pending ground cover or soil.
I also wanted to paint the road surfaces. The natural ABS sheet is not a bad color, but is quite glossy and much too smooth and uniform. I used tube acrylic paint, mostly Neutral Gray, to paint the road surfaces, with admixtures of very small amounts of Burnt Umber and Black. While I was there, I used some natural dirt and a little Woodland Scenics soil and “turf blend” to get a basic ground cover in the area. Some of the natural dirt was rubbed into the crossings. Below is a view of the area at this point. 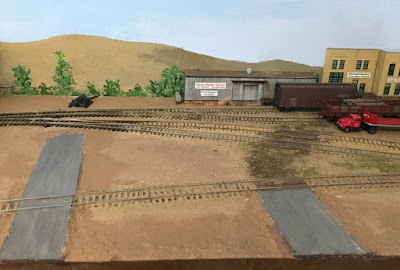 The remaining step was careful cleanup of misdirected scenic materials, and addition of street names, as I do anywhere a geographic feature like a road or a creek intersects the edge of the layout. With those steps done, and buildings returned to their places, here is a view of the scene as it is today. (You can click on the image to enlarge it.) 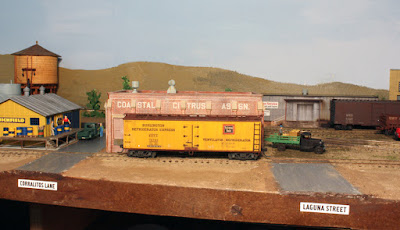 This has been an interesting variation in grade crossing styles.  I now have a total of 23 grade crossings on my layout, no two exactly alike, though there are only a few general styles. I showed earlier ones in the previous posts on this topic (links in the paragraph at the top of the present post), and this post shows more of them.
Tony Thompson
Posted by Tony Thompson at 11:11 AM