The role of mainline trains on a branch-line layout

My layout portrays a mythical branch line of the Southern Pacific, and is set in the Central Coast area of California. (This locale has been described in several previous posts; the most informative of those posts is probably the one found at: http://modelingthesp.blogspot.com/2011/01/layout-design-locale.html .) The main line on my layout serves primarily as a conduit to the rest of the world, for cars coming from or going to points on the branch. In the transition era, when I model, SP operated through or mainline trains from division point to division point, and those trains did no en-route switching; all switching was handled by local trains. So in this situation, through trains on my layout are really just passing scenery. Or are they?
One important point is that mainline locomotives would necessarily be different (in particular, bigger and more powerful) than branchline ones. In 1953, the year I model, many Coast Route freight trains were pulled by 2-10-2 steam engines, and for mainline trains on my layout, such power obviously is quite appropriate. Here is an example of a westward train so powered, just passing the Shumala depot. 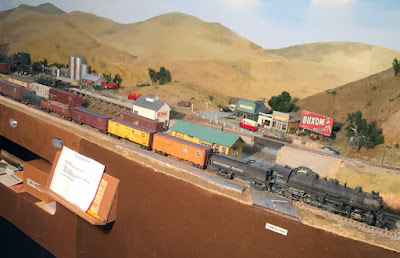 Diesel power for freight trains was becoming common in 1953, and on the Coast Route, most diesel-powered trains were either A-B or A-B-B sets of EMD F units. I have followed the same pattern, as seen on this eastward train on the main at Shumala. 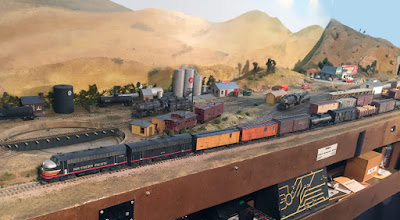 I have begun to incorporate through trains like these in my operating sessions, partly to increase the “beyond the basement” impression that is desired as part of the layout experience (see for example this post: http://modelingthesp.blogspot.com/2017/10/an-op-session-with-through-trains.html ). I expect this to continue and likely to increase.
Another factor in my use of through trains is that they can incorporate two kinds of freight cars that might otherwise not see operation on my branch. One kind is the group I call “mainline” cars, meaning cars not as well detailed or otherwise falling a little short of the cars that can withstand examination during switching (on the branch). I have discussed this distinction, which only applies to some cars, in prior posts, such as the one at this link: http://modelingthesp.blogspot.com/2011/03/model-freight-car-standards.html . Obviously viewing a car in a moving train is a different situation than scrutinizing it during switching moves.
The other class of freight cars I can include in through trains are those which have no natural destination on my branch. An example might be a box car of auto parts. These were significant traffic on the Coast Route, but would only be found on the main line. Another example might be a flat car with a large transformer load. I can include such cars very naturally in a mainline train, though they would not be realistic on the branch.
And one final point about these trains: few if any model railroaders don’t jump at the chance to “railfan” a passing train. Operating these through trains is fun in that way for both me and for visiting operators.
What about waybills for these trains? If the train simply runs from staging back to staging, there would be no need for waybills; but if cars need to switched out of the mainline locals, the Guadalupe Local or the Surf Turn, some of the cars should have waybills for destinations other than my branch. Accordingly, I have been making up waybills for a limited number of “through loads,” both eastward and westward. Here is an example of each kind (you can click on the image to enlarge): 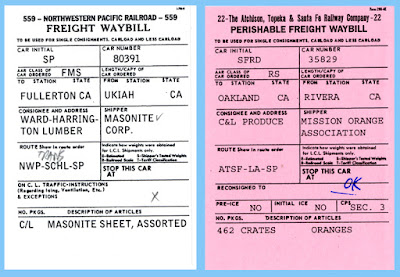 There are some handwritten marks on both bills, something that was commonplace on prototype waybills.
Incidentally, the perishable bill here is for a Santa Fe refrigerator car. Sometimes modelers will ask how it would happen that SP would be moving a reefer of PFE’s rival, Santa Fe, but the answer is simple: shippers determined routing of cars, not the railroads. Photographs document that SFRD reefers were often seen in SP trains, just as PFE reefers were often seen in Santa Fe trains.
I can’t speak for other kinds of layouts, but for my layout, emphasizing a branch line, the mainline trains are a useful and significant complement to the branch operations, and allow use of both locomotives and some cars that otherwise would be unemployed. That’s plenty of reason for me.
Tony Thompson
Posted by Tony Thompson at 6:37 AM