I have written several posts over the years about how (and whether) to upgrade Athearn “Blue Box” freight cars. (You can find them by using the search term “Athearn upgrade” in the search box at right.) I have said more than once that in today’s climate, I don’t believe it is worth the effort, because there are far better starting points in most cases. But back in the day, I did indeed do such projects, simply because then those better starting points did not exist. So, partly in response to questions I have been asked, here is how I went about that kind of upgrading. And I do recognize that some may still wish to go this way, for whatever reason.
The present post is about the 50-foot double-door automobile car Athearn produced for years (and still does). My own upgrading thoughts immediately neglect the cast-on ladders, as these are far more trouble to remove than the model deserves. Likewise, the roof with one too few panels is just plain wrong (and hard to imagine how it came about), but certainly not worth the work to change. So what would a person change to make one of these models at least a “mainline” or second-class model?
First, I always start with the roof. Most model railroads offer a viewing perspective of freight cars which is from above, and what might not be evident from ground level is way too obvious from above. In the case of the auto cars discussed in this post, like all the Athearn “Blue Box” house cars, the running board is hugely thick and really quite poorly rendered as a representation of a steel grid running board. I would immediately remove and trash it. There are two alternatives to replace it, a wood running board, for cars built before 1944, or a steel running board for cars either built after 1944, or rebuilt or upgraded after 1944, thus receiving a replacement running board, Obviously here you need information about your particular prototype.
For wood running boards, I have usually used individual strips of scale 1 x 6-inch wood, though styrene strip works fine too. The Athearn body is molded with a kind of representation of the diagonal supports under the ends of the running board, and though these are crude, they are pretty invisible under the end of the board, so I rarely replace them. The steel running board is well represented with an etched metal board, such as those from Plano (see their line at: http://www.planomodelproducts.com/ ), and nowadays there is also the option of the Kadee Apex plastic running board, available in 50-foot as well as 40-foot versions. I personally don’t think it is as prototypically “lacy” as the Plano product, but have used both.

This photo shows a Plano running board in the foreground wood 1 x 6 strips in the back.You can click on the image to enlarge it.
Next up would be the Athearn side doors, which like the ones on the Athearn box car are way too short. Athearn molded the lower door tracks up on the car body too far, making the doors too short. I usually do not replace them, but it is easy to use sacrifice doors to provide a panel or two to extend the kit doors, should you wish to do so. More important to me are the immense “claws” molded on so that the doors can slide easily, which in addition to being an unsightly size, have no prototype equivalent. They have to go, and are easily sliced off.
But in addition, the lower door track, especially prominent on a double-door car like this, is a giant ledge with no prototype equivalent. I have usually sliced it off, leaving either nothing, or a piece of scale 1 x 4-inch styrene strip in its place. With that bottom track gone and the claws removed, the doors are at least presentable, if still too short. In the photo below, the shadow shows how minimal the track becomes when replaced with styrene strip.

My third area of concern is the hand brake area of the B end of the car. The Athearn brake wheel has an oversize rim and represents no actual hand brake. I have used a wide range of brake wheels over the years, from Precision Scale brass ones to the several fine wheels available from Kadee today, accurately representing the distinctive products of several manufacturers. I also never liked the stubby Athearn brake step nor its crude supports. I usually extend the brake step by gluing a piece of scale 2 x 4-inch styrene to the edge of the existing step, cutting off the molded-on supports, and replacing with styrene 1 x 3-inch strip. If nothing else, these visible improvements distract attention from the molded-on ladders and the brake rod and retainer line. 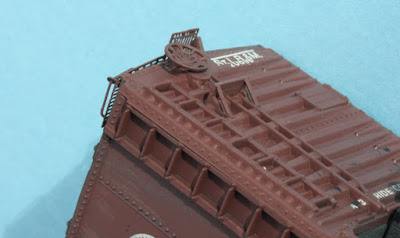 Lastly, one may choose to replace the molded-on side grab irons with wire, and the overly heavy sill steps with A-Line or other metal ones. I almost always replace the side grabs, and usually but not always I replace the sill steps.
The foregoing steps do improve the look of the car. But make no mistake about it, even an upgraded car still contains many compromises. As I said at the outset, Athearn automobile cars upgraded this way remain, in my estimation, mainline cars only, but my mainline trains do need this traffic, for both assembled automobiles and auto parts. These cars help fill that need.
Tony Thompson
Posted by Tony Thompson at 7:14 AM