An op session with through trains

I hosted operating sessions on my layout on October 14 and 15, and re-introduced a feature not included for a number of sessions, namely through trains operating from staging. I want to say a little about that feature in addition to describing the sessions.
On October 14, the crews who were marked up were Bill Kaufman, Jon Schmidt, Leo Pesce, and Chuck Hakkarinen. This was the first time on the layout for Leo and Chuck, and being experienced operators, they did just fine. Bill and Jon are, if anything, even more experienced than Leo and Chuck, and they too handled all the assigned work with aplomb. Here are Bill and Jon (left to right), organizing the paperwork at Shumala. Bill was the conductor and is figuring out the moves that will be needed. 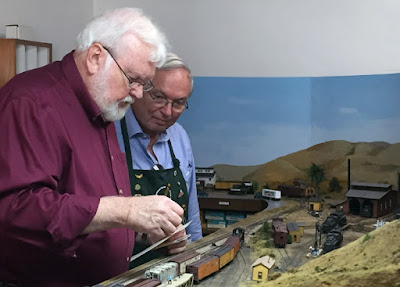 Meanwhile Leo and Chuck were taking care of the switching at Ballard. Here we see Leo uncoupling a cut of cars, while Chuck, who was engineer, looks on. 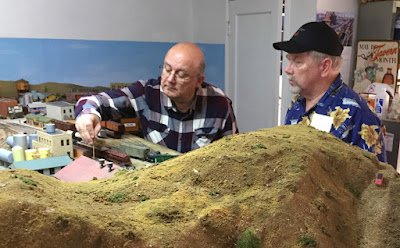 The second day, October 15, saw five crew members signed up, Ray deBlieck, Otis McGee, Seth Neumann, John Rodgers, and Pat LaTorres. John was a little late arriving, through no fault of his own, and took turns in the two-man crews. Below are shown Ray and Otis (left to right) at Shumala, with Conductor Ray studying a waybill. 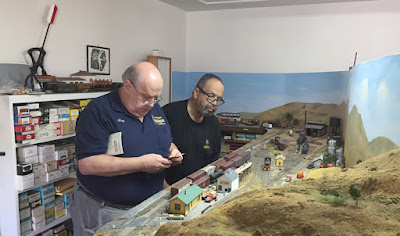 The team on the other side, at Ballard, were, from left, Pat, Seth and John. The scenic divider between the two halves of the layout intrudes into the photo at left. Seth is completing a switch list, by the look of it. 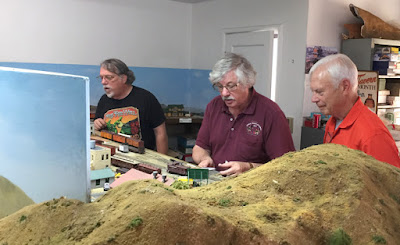 Most aspects of the session went off smoothly, but as notoriously happens with guests present, some new layout gremlins reared their ugly little heads. Luckily none were serious, though they all pointed to more maintenance needs. I think a few of the track problems probably stemmed from some high daytime temperatures we had last month, and I am already working on them. Problems such as an area of tight gauge in the track, where none has been present for years in that area, clearly reflect some kind of layout structural change or shift.
Now how about the through-train part of the story? I previously had constructed a timetable for the Guadalupe Subdivision of the Coast Division, removing many station names remote from the area of my layout, but keeping all the train times. I showed this as Figure 12 in one of my “Getting Real” columns in Model Railroad Hobbyist, the issue for October 2014 (you can download or read on-line this or any issue of MRH, for free, at their website, www.mrhmag.com .) That column also presented numerous details about the rest of my timetable document. Reproduced below is that compacted timetable.(You can click on the image to enlarge it.) 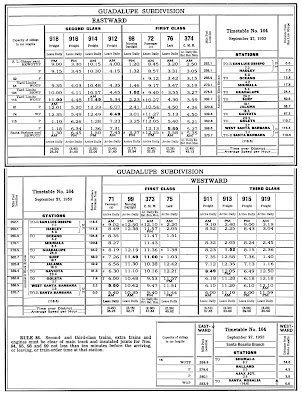 With that timetable in mind (and in the hands of the crews), our railroad starting time was 9:30 AM. This meant that mail trains no. 71 and 72 had both departed, along with freight no. 911 which followed 71. There were no more trains before the westward Daylight at 12:26 PM, except freight no. 914, which is the through train that I operated.The rear of that train is shown below as it entered Shumala, with the four automobile-type cars prominent in this view (along with the large gondola load of a green tank, seen just ahead of those cars).

I will have more to say about development and use of through trains in my operating scheme, and will return to the topic in future posts. For now, though, I’ll just say that it was fun to include them in last weekend’s operating sessions.
Tony Thompson
Posted by Tony Thompson at 11:05 AM