This phrase, “mind the gap,” is familiar to anyone who has been to London, as it appears on station signage throughout the Underground system, warning you to be careful crossing the gap between platform and passenger car. One can even purchase T-shirts in London with this phrase on them. But in the present case, I am using it to refer to an unwanted gap that has developed in my staging system. 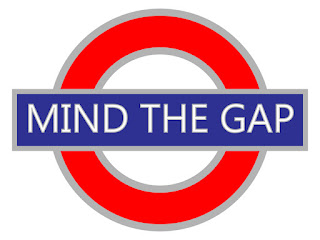 I showed, some years ago, the development of my “staging drawer,” effectively a transfer table, underneath my layout town of Ballard. This idea came from something similar that was built for John Signor’s layout, as I indicated in my first post about my staging (that initial post from 2010 is at this link: http://modelingthesp.blogspot.com/2010/12/staging-trackage-installation.html ). Eventually my drawer held 12 tracks, and is seven feet long, as I showed in my fourth installment about the construction of it (see it at: http://modelingthesp.blogspot.com/2011/02/staging-trackage-installation-4.html ). When first built, this worked very well, and I operated test trains into and out of all twelve tracks without problems. Shown below is a view of the drawer pulled out to show its contents, with the town of Ballard above. 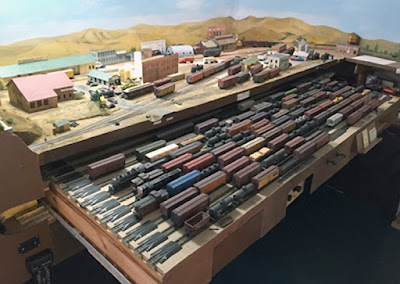 But the entire drawer, or staging table, is built of wood, with 1 x 4-inch joists underneath and a 3/4-inch plywood base, supporting a Homasote track board. In hindsight, I suppose it was inevitable that this structure would shrink and distort as it continues to dry out. It still works all right, but increasingly there is a gap between the rails on the main layout, and the rails on the staging drawer. That’s the gap referred to in the title of this post. Here is how it looked recently, with the gap to the left of the photo. The staging table is on the right side of the gap.

Track 2 is aligned with the layout here, and you can see that the width of the gap exceeds an eighth of an inch. This can easily cause rolling stock to lose track gauge and catch a flange in the gap. I do have rerailers on each side of the gap, but these do not always suffice to correct derailments occurring at this large gap.
I had several thought about how to correct this. But the simplest was to unsolder the rail joints at the inner edge of the rerailer (at the right edge of the photo above) and move the entire end piece of track toward the left. This worked well, as you can see in the view below. The gap is now less than one-sixteenth of an inch, and locomotives like this Consolidation, and all cars, roll smoothly over it. 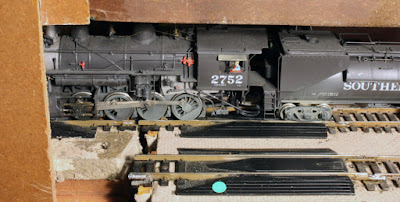 This correction will enable me to return to operation of mainline trains during operating sessions. I have often operated such trains when running the layout by myself, and could “baby” the equipment over the old gap. For an op session, though, I want to be able simply to run the train when desired, without the need to creep across the gap and manually re-rail any mistakes. The gap turned out to be fairly easy to repair, and I’m glad I could correct this problem.
Tony Thompson
Posted by Tony Thompson at 10:20 AM