I have had a couple of questions about this topic recently, and was able to answer on the basis of my own experience, interviewing Pacific Fruit Express retirees for the PFE book (Thompson, Church, Jones, Pacific Fruit Express (2nd edition), Signature Press, 2000), and also interviewing various former Southern Pacific employees for understanding of SP practices. In this post, I will pass along some of those experiences.
I began this kind of interviewing while I was collecting material for the PFE book. I had arranged to fly out west (I lived in Pittsburgh at the time) to meet up with, and interview, Pete Holst, long-time Assistant General Manager of Car Service for PFE. It occurred to me that I needed to know more about the interviewing process I was going to attempt, and accordingly consulted a colleague in the Department of History at Carnegie-Mellon, where I was teaching at the time, to give me some pointers.
He told me that he believed there were three keys to effective interviewing of this kind. First, do record the conversation; it seems vivid while you’re hearing it, but it fades terribly quickly. Recording can be an issue, because some interviewees are made nervous or uncomfortable if they are staring at a recording device. He suggested simply putting it under a coffee table, or on the floor alongside a chair, to get it out of view of the interviewee.
Second, he urged me to take along lots of PFE photos, nice big 8 x 10-inch prints if possible, because these really stimulate the memory of the person you are talking to. I did this, and just as he had stated, almost every one brought forth a story. This little technique is something I have used in every interview since, and it always works very well.
One of the photos I took along to show Pete Holst was a Don Sims print of icing in progress (shown below), and it triggered tremendous memories for Pete. He must have gone on ten minutes or more, with all kinds of reminiscing about icing, car supply, and perishable trains, and naturally on his first glance at the photo, he correctly recognized it as El Centro, California. 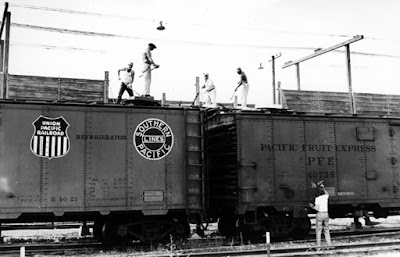 I’ve always loved the clerk at the bottom of the image, holding a clipboard and chalking info onto the cars.
Third, my historian colleague warned me that at least 90 percent of the “facts” I would be told would be wrong. Yes, the person interviewed may know a great deal about how things were done, and why, and of course that is information you can get nowhere else. But facts? He said that we all remember things far less well than we believe. Someone will say, “we did that shop program in 1938, and I know the year, because my sister got married that summer.” Sounds like a strong memory, right? But it will turn out his sister didn’t get married that year, or if she did, the shop program was a year later. So he urged me to let the conversation flow however it would, and to not worry about chasing down any facts, but let the stories give you the “how and why.” You can get the facts later with your own research.
To my surprise, he was entirely right about the bad facts. Both with Pete Holst, and later with Earl Hopkins, retired Chief Mechanical Officer of PFE who knew car design and construction forwards and backwards, there was just a whole series of wrongly-remembered numbers and dates and places. But as suggested, the “how and why” was terrific. I hadn’t set out to collect that kind of thing, but I feel lucky to have had the guidance, so that I did get some great information.
My longest interview with an SP person was Malcolm (Mac) Gaddis. I filled up two 60-minute tape cassettes and we ran a little beyond even that (memo to self: take far more recording capacity than you expect to need). I was especially interested to interview Mac about San Luis Obispo, where he had worked in the early 1950s, and had lots of 8 x 10 prints to spread out on his coffee table. Wow, did we ever cover a lot of ground! Here’s one I remember he really enjoyed, a Richard Steinheimer photo of the blue flag being taken down from the Daylight’s helper at San Luis Obispo before departure (from the DeGolyer Library, used with permission). 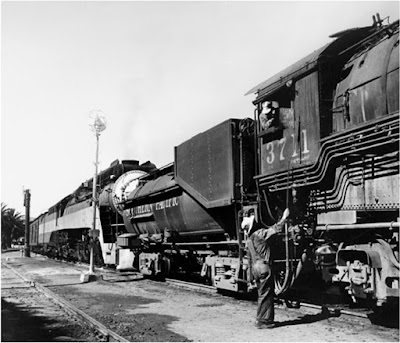 When I got back to Pittsburgh after that first interview with Pete Holst, my colleague told me there was a fourth thing to face up to: I needed to transcribe the entire tape of the conversation. It’s fine to have that tape cassette there on your shelf, but access to the contents is really quite limited. Transcribing a tape or any other audio file is pretty tedious, and I just drove myself to put in the time to do it. And it’s worthwhile to do this soon after the tape was made, because there are always mumbles or unclear words or both people talking at once, and while your memory is fresh, you probably will remember what was being said at such points.
I will be quick to admit that at the end of the transcribing you have something far more valuable than the tape itself — the conversation is entirely in words on paper, and you can read and refer to it easily. I later donated copies of all my PFE transcripts to the California State Railroad Museum, so that these records are available to other people besides me.
With the Gaddis interview, I have extracted several relevant sections that have some bearing on the modeling I describe in this blog, and have put them out in previous posts. Here is a set of six links to those posts:

These segments do not exhaust anywhere near the entirety of my interview, but they are perhaps the most interesting in terms of my modeling of the SP Coast Route.
I offer these pieces of advice from my own experience with interviews. They worked for me, so I wanted to pass them on to anyone thinking of doing such interviews. These interviews are in many ways priceless windows into a vanished world. If you get the chance to do one, don’t pass it up.
Tony Thompson