Some months ago my friend Jim Providenza gave me an old model of an ice refrigerator car, too old a prototype for his 1970-era layout. As it’s a real classic, I accepted gratefully, and decided to explore exactly what it was. I show the model below as I received it. You can notice on this side that the door latch casting is broken.

The model’s car number, 68423, falls within a 250-car order that Western Fruit received from Pacific Car & Foundry in 1949, cars 68400–68649. As it has a wood floor beneath its underframe and pressed-metal hatches, I immediately thought of the Athearn line of metal car body freight cars.

But Globe Models, prior to its purchase by Athearn in 1951, also offered an HO steel reefer. Which one was it? The great resource for questions like this is the HO Seeker site (see the Athearn page  at: https://hoseeker.net/athearn.htm ), providing many of the Globe and Athearn catalogs, and even kit directions. Looking at the 1950 directions on the site for the Athearn reefer, numerous details matched up with the model I have. It’s an Athearn. Here is that image; you can click to enlarge if you wish. 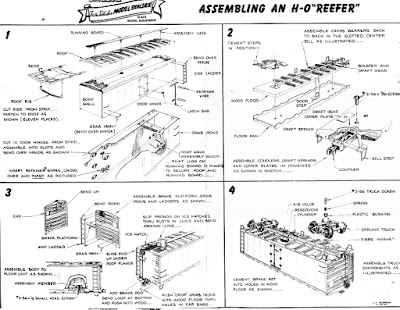 First up was to replace the broken door latch. That’s simple with a Grandt Lines part from my parts box. Next I turned to the underbody. You can see in Step 2, above, that Athearn provided a one-piece white-metal casting of the bolster, coupler box, and corner braces, but all of this except the bolster had been removed on this model. The reason was that a previous owner had installed Kadee “Talgo” trucks, the ancient style with the straight trip pin and No. 4 couplers with a riveted box cover. I didn’t know that Kadee had even made these back in the 1950s! Sill steps were gone too.

I removed the Talgo trucks (to return to Jim as a memento) and replaced the sill steps with actual Athearn metal parts from my stash of ancient parts. I then body-mounted Kadee coupler boxes with no. 158 whisker couplers, and added a pair of Kadee sprung trucks. The model was also missing its brake rod below the hand brake, so I added that. Then all parts that should be brown (hatch covers, end ladders, brake rod) were painted Tamiya Red Brown (XF-64). 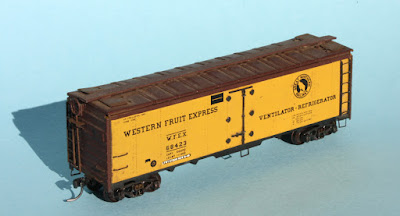 Last part of the present project was to add end numbers, which the original Athearn metal models never had. I used the very handy Walthers set from years ago, “Reefer End Nos,” their set 706800. 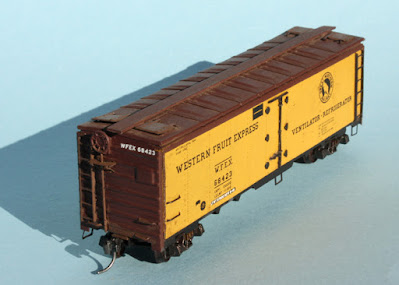 The car still needs to have some light weathering, being a recently built car, but that will come later. So this completes the details of this restoration.

These Athearn metal cars were excellent in their day. And in fact their relatively fine pressed metal ladders and stamped sill steps compare favorably with much that we have today, despite being a design of 70 years ago. This model will hold up just fine on my 1953-era layout.