As part of my ongoing series of posts to this blog, about applying graffiti to freight cars for an HO scale layout set in 1996, I will be describing my approach to autorack cars. But before beginning, I will mention that you can easily find previous posts in the series by using “freight car graffiti” as the search term in the search box at right. The previous post in the series is here: https://modelingthesp.blogspot.com/2021/01/freight-car-graffiti-part-21-more-box.html .

These autorack cars are very long, nominally 89 feet, and typically comprise a three-level, railroad-owned structure to accept roll-on, roll-off automobiles, mounted on a flat car (which may be called a “platform”), often owned by Trailer Train (now TTX), sometimes by the railroad. Here’s an example, in a prototype photo by Matthew Schimmel, of a Southern Pacific rack on a TTX flat car, ETTX 905167.

This particular car does have graffiti, applications which are as common on autoracks as on any car, though usually they are relatively low in height on the car. Larger graffiti pieces call for longer work periods and often additional equipment like ladders, and because autoracks carry relatively hot cargo, these cars usually don’t sit around waiting to be painted. Here is an example from my own photography, in this case showing a car with the common “outline” or “throw-up” pieces, which can be done quickly (I discussed these variations in my article in Model Railroad Hobbyist, in January 2020). 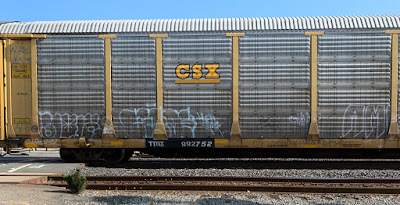 Models of these long cars have been available for some time. It was my challenge to apply graffiti to them. For the present post, I will show two HO scale racks as I received them. First, a Grand Trunk Western rack, riding on a railroad flat car, GTW 504109.

For the GTW rack, I applied two decals on the left side, one from Microscale set 87-243, the other from Blair Line set 2263. I then weathered the car with acrylic washes, gave it a coat of clear flat finish, and added tags with “Micron” and “Gelly Roll” pens, as in previous posts. Here is that left side, completed:

For the right side of the car, I used another Blair Line decal, this time from set 2257. As completed, with weathering and tags, it looked as shown below. You can also see the roof weathering.

The Union Pacific autorack was approached a little differently. To begin, on the left side of the car, I applied a Blair Line decal, from their set 2261. The Blair Line images are largely of smaller, horizontal graffiti pieces, comparable to the low applications I have seen in the prototype, and thus what I wanted to apply to these cars. Then I applied acrylic-wash weathering and added a variety of tags.

On the right side, I again applied a Blair Line decal, from set 2267, and a T2 decal. Then the addition of weathering and a few tags gave me the look you see below (as with all these photos, you can click on the image to enlarge it if you wish).

These cars are an interesting change from relatively smooth-sided cars like covered hoppers or most box cars, and were thus a chance to try a few slightly different approaches. As always, I wanted the final results to be era-appropriate and fit in with the remainder of the layout car fleet. I believe these cars can do that.