In a number of previous posts about waybills, I have touched on the issue of car weights, most recently in a post about various ways these weights were shown on prototype waybills. I included some comment about how model waybills could show the same. To consult that post, you can use this link: https://modelingthesp.blogspot.com/2021/01/waybills-part-78-car-weights.html .

In the present post, I want to show some additional prototype weight agreement stamps, all from the waybill collection of Andy Laurent, whose help I greatly appreciate. I will begin with the question of the various regional bureaus that administered weight agreements (both calibrating scales and negotiating unit-weight agreements).

I’ve shown in previous blogs, examples of the stamps of the Western Weighing & Inspection Bureau (or WWIB), which covered the Midwest, not the Far West. An example is shown below for a WWIB stamp, with its agreement number in the center. This was usually stamped, as here, in the area of the waybill where weights were recorded. One thing I like in this example is that it is a little unevenly stamped, left to right, a realistic detail that will look good on model waybills. 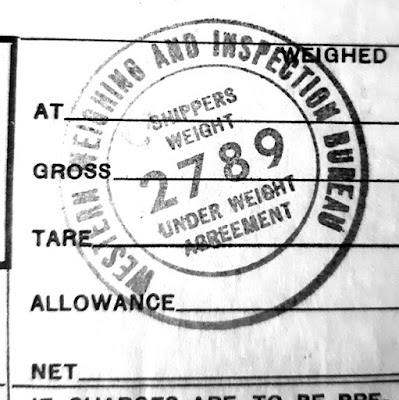 There were also Eastern, Central and Southern WIBs, and the Far West was administered by the Trans-Continental Freight Bureau. I will have more to say on the TFB in a future post, but that makes a total of five bureaus. There may even be others; if any reader knows of others, please let me know.

Let me extend my examples. First, here is an EWIB stamp. Note that it was stamped with purple ink, though the great majority of these stamps were black. 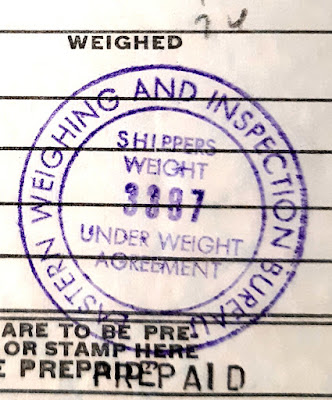 I don’t know the boundaries of the various WIBs, only their approximate territory, though there is reason to believe that they were creatures of the regional Tariff Bureaus, which had the same kind of regional names. If the boundaries were the same, it would simplify matters.

I mentioned a Central WIB above. Andy has not found many Central stamps on his waybills, but here is one example. Note that the name is reversed: Central Inspection and Weighing Bureau (CI&WB). 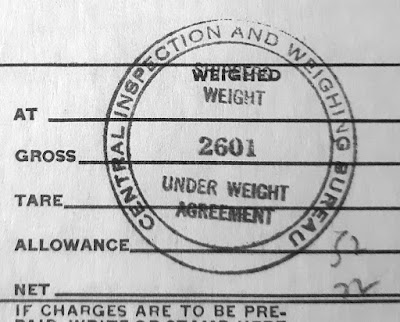 The Canadians had their own system, apparently divided into Eastern Lines and Western Lines (if a Canadian reader can correct that statement, please do so.) Here is a Canadian Freight Association stamp: 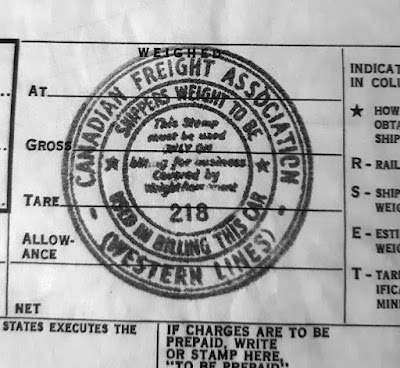 I mentioned above that most stamps were black, and that is borne out by looking at many, many waybills, Purple does show up occasionally, and so does red. Here is a red example. 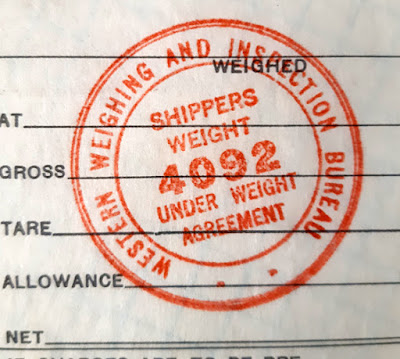 These stamp images can be converted to “transparent” images that can be overlaid onto waybill forms, as I have shown in previous blogs, and in a future post I will talk about that topic a little more. But this post shows the regional differences I am aware of.