In recent blog posts about a single aspect of prototype waybills, I have shown ways the car weight was shown on the bill, weight being the basis for tariffs of essentially all cargoes. (There were also carload tariffs which did not require weighing, but still used weight as a basis.) In the previous post, I showed a range of weight agreement stamps, which allowed cargo weight to be established without using a railroad scale. You can see that post here: https://modelingthesp.blogspot.com/2021/02/waybills-part-79-weight-stamps.html .

In the present post, I want to say more about scale weights, as they pertain to Weighing and Inspection Bureaus, or WIBs. A railroad scale could be certified by a WIB, in which case the scale slip or printout would be so identified. A shipper’s scale could likewise by certified, and a stamp used to document that certification. And I want to include the West Coast’s Trans-Continental Freight Bureau, or TFB. As in several earlier posts, all the waybill examples shown here are from Andy Laurent’s collection.

To choose an example, below is a WIB stamp, from the Southern WIB, for a scale located at Montgomery, Alabama on the L&N, and it has spaces to write in the weights; but note that the stamp was applied at an angle, and the weight readings themselves written in the spaces provided in the waybill itself,, not in the spaces in the stamp. 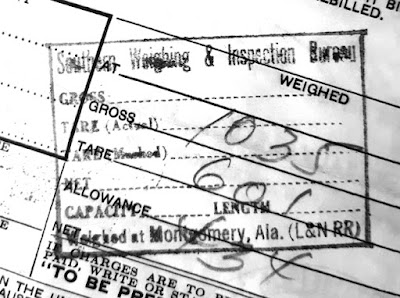 This kind of stamp, evidently certifying the railroad’s scale, was widely used, though usually stamped so that the spaces for weights lined up better with the waybill’s lines than the above example. Here is a WWIB stamp, which happens to be blue, to illustrate the point. Interestingly, the scale was on the Copper Range Railroad, at Houghton, Michigan, on the Upper Peninsula. Note also that the weights have been typed in where designated on the stamp, not on the underlying waybill form. 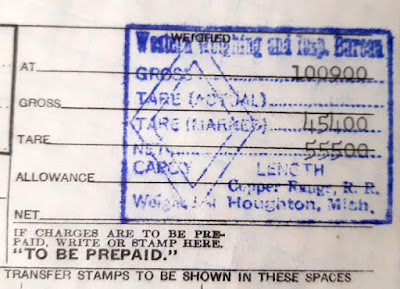 I showed “scale slips” in the previous post (see top paragraph, above), which were slips printed out by the scale mechanism and pasted onto the waybill. Below is one from the TFB. As you can see, this scale was at Alturas, California on the Southern Pacific.

It is interesting in the above stamp that the Weighing Department is shown as part of the Freight Bureau, which may have been true of other regional Freight Bureaus. The gross weight here is 105,040 pounds and the tare weight 45,100 pounds, giving a net weight of 59,940 pounds. This would be 59,900 pounds to the nearest 100 pounds. 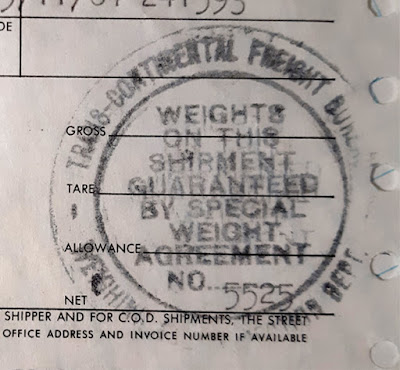 The TFB, of course, also certified railroad scales (as implied by the paste-on scale slip shown above), and this shows up in stamps. In this case, the scale was located at Appleyard on the Great Northern, just east of Wenatchee, Washington. 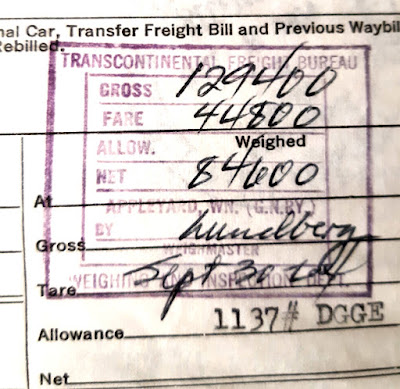 It is interesting to see these various stamps used for weight information on waybills, though most model waybills provide no space for the kinds of weight data the stamps contain. One exception is the larger-format waybills some layout owners have chosen, such as Paul Weiss’s bills, that I described in a previous post (see it at: https://modelingthesp.blogspot.com/2020/06/waybills-part-69-another-approach.html ). Here’s an example, in this case with an example of a weight agreement stamp: 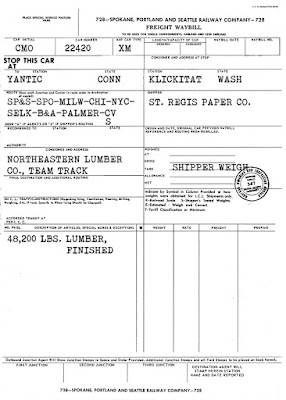 In a future post, I will show some of the stamp images I modified to use on model waybills (I have previously described how I do this in Photoshop, and it may well be possible in other graphic applications; that post can be found at the following link: https://modelingthesp.blogspot.com/2020/10/waybills-part-73-creating-rubber-stamps.html ).