I have written extensively in this blog about various waybill topics, as is evident from the Part number in the title. In the present post, I want to describe an entirely different form of model waybill. (To find any or all of the prior posts in the series, the easiest way is to use “waybills” as the search term in the search box at right).
The waybills I use on my own layout were designed and created by scanning, then cutting down, a prototype waybill (this approach works because every railroad used the standard AAR form, or a near-exact copy, so any prototype waybill from close to the right era is a suitable original). I’m often asked, what type face did I use? I didn’t need to choose one; I use the actual scanned AAR form lettering.
I described how I did this cutting down in an article in Model Railroad Hobbyist or MRH; that article appeared in the issue for May 2012, and issues of MRH from that era are available to read on-line or download, for free, at their website, www.mrhmag.com .
As I described in that article, I began with an actual Pennsylvania Railroad waybill that I happened to have, shown below. Absent the pin-feed edges, it’s 8.5 x 11 inches in size. Note that very few of the boxes contain anything filled out (you can click to enlarge). This was common. 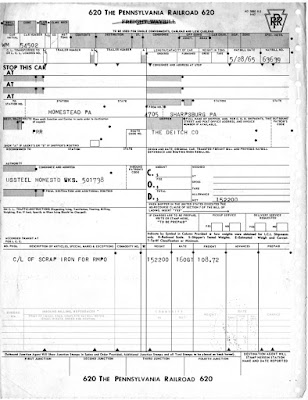 A great deal of the space on this document is for things we do not utilize in model railroading, so I simply discarded all the excess, shown below in pink. 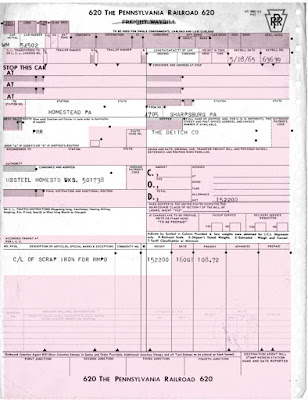 But note that I was removing a great deal of material that gives a prototype waybill its distinctive appearance, because I was aiming at a fairly small document for model use, either 2.5 x 3.5 inches for my layout, or 2 x 4 inches to substitute for four-cycle waybills on Otis McGee’s layout. One of my own examples is shown below. It’s quite workable but doesn’t look a great deal like the original, shown at the top of this post; there just isn’t room (remember, it’s 2.5 x 3.5 inches). 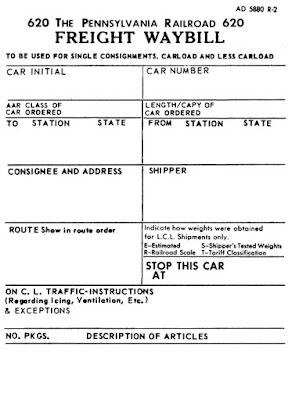 There isn’t even room to include the Pennsy keystone emblem of the original, which I regretted.
I recently had the opportunity to revisit this process and entirely re-think how to make a useful model waybill. My friend Paul Weiss (and helpers!) is well along with constructing a large layout that models the Central Vermont Railway across Connecticut. He sees no reason to make waybills as small as what I use, and thought a good compromise with the 8.5 x 11-inch original would be 5 x 7 inches. Switch crews can carry these on clipboards when working local freight, or, if folded in half lengthwise, in a pocket.
This much larger size was actually a liberating idea (note that it is four times the area of my own waybill form). I went back to the original PRR waybill scan shown at the top of this post, and re-cut the removals. After a first run-through, I had arrived at what you see below, not yet ready to be 5 x 7 inches nor final in content, but heading in the right direction. 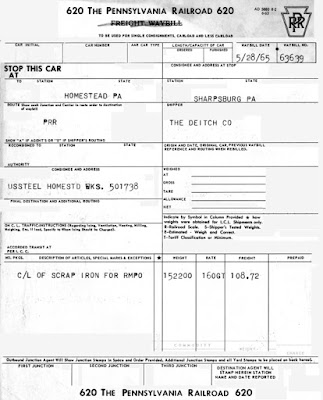 Note that I have not yet removed most of the original typed entries. I now had to carefully consider what finally to remove or re-arrange. This went quickly, and I drew upon the many waybill railroad-name headers that I have collected to start making up some final 5 x 7-inch bills. Here is an example, incidentally an Erie bill, chosen in part to show that I now have space to include the railroad emblem for those roads that did so: 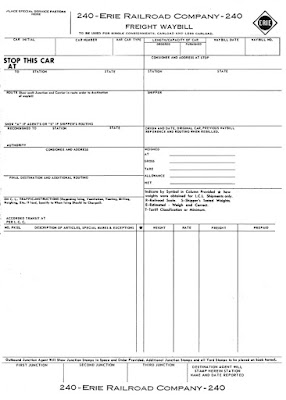 I experimented further by filling out a few bills for Paul to look at. Here is one example, directed to one of the industries on his layout: 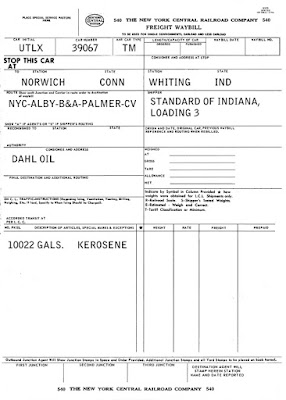 This has been very interesting and enjoyable, to go back to the foundation of our model waybills and re-think what we can include. I have long been envious of those using larger model waybills (especially in the Chicago area, Dan Holbrook,  Frank Hodina, Bob Hanmer and others), so I welcomed the chance to explore them myself, and to try once again to get a document that looks closer to the prototype that many of us are striving to represent.
Tony Thompson
Posted by Tony Thompson at 11:18 AM