In the previous post on this topic, I described an approach to the design and preparation of model waybills that was quite different from earlier methods, methods that had been aimed at creating compact documents. Instead, I designed a 5 x 7-inch waybill, which permitted the freedom to come much closer to the appearance of prototype waybills. (You can read that post at: https://modelingthesp.blogspot.com/2020/06/waybills-part-69-another-approach.html .)
In the present post, I want to show bill designs beyond the standard freight waybill I showed in that prior post. First, the perishable freight waybill. These were printed on pink stock by railroads that followed the AAR recommendation to do so. The prototype bill has the complexity of considerable space provided for multiple diversions or reconsignments en route, as well as space for multiple entries about icing, top icing, heater installation, and so forth.
I decided to include those features only in minimal amounts, sufficient for most modeling purposes. Below is a portion of the center section of the bill  that I modified from the AAR original to approximate some of the perishable bill details.(You can click on the image to enlarge it, if you wish.)

On the left side of the center line are some reconsignment blocks, and on the right are very simple icing directions. This should be enough to convey those aspects of perishable shipment.
Incidentally, among the many examples of prototype waybills that I have seen, few happen to have been for perishable shipments. But you can view the AAR standard perishable form in the very useful book, Railway Accounting Rules (AAR, Accounting Division, Washington, DC, revised and reissued every few years; I use the 1950 edition for modeling 1953). This book is usually available from on-line book dealers for modest prices.
Here is an example of a complete perishable bill with the features shown above, filled out. (Again, you can click to enlarge.) 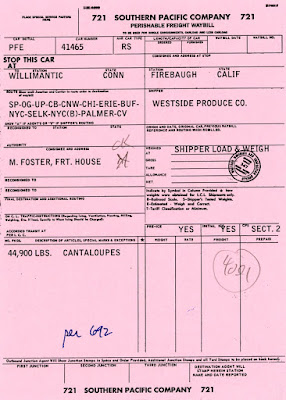 Note the Weight Agreement stamp and a few handwritten notations, very common features of real waybills in use.
Another familiar type of waybill is the livestock waybill. Here also, the prototype contains considerable space devoted to accommodating notation of unloading, feed, rest, and reloading occurrences, along with extensive information about stock loading. And again, I decided to include enough of this to make it visible, but considerably less than the prototype.
Here is the loading and bedding section as I compressed it. Note that most of this just asks for a yes or  no answer. I have seen a filled-out prototype livestock bill with all of this section filled out by hand, though the rest of the bill was typed.

The part about resting, feeding, etc. is at the bottom of the prototype form, and I located it the same way, but substantially abbreviated. This is the entire bill bottom, exclusive of the railroad name.

Here is a Union Pacific example of my version of the livestock waybill, only partly filled out with typewriter font; the rest will be filled by hand. 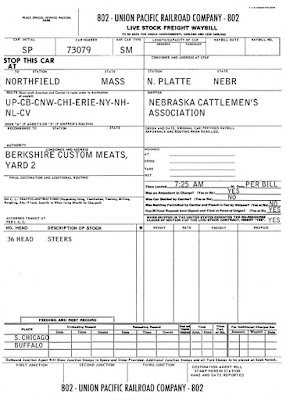 Finally, there is the transit freight waybill. This is substantially the same as a freight waybill but has spaces at the bottom of the bill to document the information about inbound loads that are the basis for transit rate privileges on the outbound load. But because “milling-in-transit” is a complex subject, I will postpone it to a future post, along with a summary of all the prototype background.
I am enjoying doing this re-examination of prototype bills, and the decision-making to evaluate and choose the parts to incorporate into a model-operation-suitable format. And I continue to be very pleased with how much these new bill designs look like their corresponding prototypes.
Tony Thompson
Posted by Tony Thompson at 11:58 AM