Awhile back, I posted a description of two very nice 3-D printed loads that I purchased from Multiscale Digital LLC, and how I chose to paint them (you can find that post here: https://modelingthesp.blogspot.com/2020/05/impressive-flat-car-loads.html ). These loads are based upon Bethlehem Steel foundry photographs, provided by Eric Thur, and digitally modeled by Multiscale Digital.
I then showed how I made blocking for one of the loads, a large press crosshead from Mesta Machine, and I included some background on the Mesta Machine Company of Pittsburgh. That post is at the following link: https://modelingthesp.blogspot.com/2020/06/blocking-for-big-loads.html . In the present post, I turn to the second of the Multiscale Digital loads that I purchased.
As I mentioned in the post cited in the top paragraph, above, I was inspired to proceed with these loads when I saw Eric Thur’s model at the Cocoa Beach meeting, Prototype Rails, last January. His model was a “double shaft bearing” casting on a flat car. He was kind enough to send me one of the Bethelehem Steel images of this casting, complete with a workman posing alongside for scale. 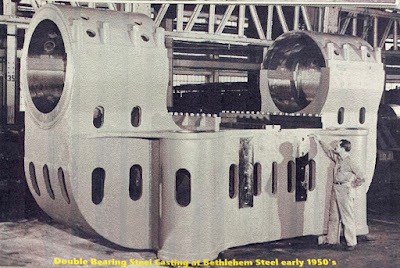 The model that Eric brought to Cocoa Beach was a heavy-duty flat car, P&LE 6887,  a 110-ton car, built from a recent Funaro & Camerlengo kit, and with blocking and elegant (prototype) sign attached, looked like the photo below (this is not the same image that is in the post that is linked in the first paragraph of the present post).

I don’t have a flat car like that one, but do have a 90-ton New York Central flat car that could carry this load. It’s a depressed-center car, so wouldn’t be blocked the same way as Eric’s model. But of course it will have “DO NOT HUMP” signs and just has to have that foundry sign. Again, Eric sent me an image of the sign.

So adding the sign to my load, and then fitting the blocking to the car (I again used scale 10 x 10-inch stripwood with bolt heads), I obtained this result:

This is a Walthers model, equipped with Eastern Car Works Commonwealth 90-ton trucks, and lettered as NYC 499056.
As I said with the previous Multiscale Digital load, these are really interesting and worthwhile load projects. I don’t have too much industry on my layout that can justify receiving a load like this, but of course they can be very correctly seen, and will be seen, in passing trains on my layout’s SP Coast Division main line.
Tony Thompson
Posted by Tony Thompson at 10:47 AM