My tank swap article in RMC

Back in 2011, an article of mine was published in Railroad Model Craftsman (July issue), aabout a project I did that swapped the tanks and underframes of two different manufacturers of model tank cars. These two models were an InterMountain 8000-gallon tank car, and an Athearn “chemical” insulated tank car, the latter tank cut down in size. I have mentioned this article before, but didn’t try to make anything available more than a summary. Here’s the link: http://modelingthesp.blogspot.com/2011/06/tank-car-modeling.html .
More recently, I have had inquiries about this article, because the new owners of Railroad Model Craftsman magazine (RMC) are not making back issues as far back as 2011 available, so that my article is now essentially lost unless you happen to have that particular issue. To remedy the situation, I have uploaded a PDF of the original article, as I wrote it and submitted it (not as RMC printed it), to Google Drive. It is a layout with photos inserted close to the relevant text. You can access it at the following link, and either read it on line, or download:

The article ended up creating a particular 8000-gallon car with a GATC-type underframe, a car leased to El Dorado Oil Works of Berkeley, California (edible oils, not petroleum products), and an insulated Warren Petroleum car on an AC&F underframe. Following are photos of the final product in each case. First, the El Dorado car, lettered with custom decals, and shown on my layout: 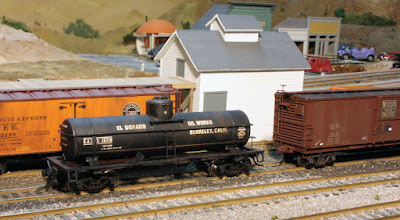 The prototype for the model is the following photo, a Wilbur C. Whitaker photograph taken at West Oakland, California in 1939, of this same car number.

The other model tank car suffered from not having an exactly correct decal set (an old Champ set), but enough to make the most of what was done. The tank was cut down in length to fit the InterMountain underframe, and a new dome created. This photo also is on my layout. 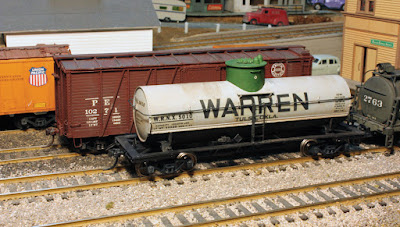 This article describes an interesting exercise, not because either of the tank car models produced are necessarily of wide interest, but in showing the techniques used. Those techniques may have far wider application beyond these specific projects.
Tony Thompson
Posted by Tony Thompson at 10:42 AM