Over the years, I have written several times in this blog about Athearn tank cars. One important reason is that the old “Blue Box” plastic models, both the single-dome and the three-dome, have been very widely used in the hobby. The size of these tank cars, about 12,500 gallons, is pretty large for the steam and transition era, but as has been widely noted, Athearn almost certainly was following a Southern Pacific prototype. The SP tank car fleet in the transition era was dominated by 12,500-gallon cars.
That plastic Athearn single-dome car can in fact be converted into a fairly solid representation of the SP prototype. The basics of converting an Athearn tank car to SP prototype were described in my article from the SP Historical & Technical Society magazine, Trainline, issue 71, and  that original article was updated and refined in a previous blog post; it is at: http://modelingthesp.blogspot.com/2011/05/modeling-sp-tank-cars.html.
Also of interest is the predecessor Athearn tank car models, all metal and very nicely done. I described both the early Athearn line, and the Globe Models tank cars that were acquired by Athearn in 1951, in one post (see it at: https://modelingthesp.blogspot.com/2017/10/some-old-metal-tank-car-kits.html ). To briefly summarize, in their own line, Athearn offered a 10,000-gallon car they called a “Shorty,” and two 12,500-gallon cars, a single dome and a three-dome.
I restored one of the “Shorty” cars to service some time back, and enjoyed its excellent prototype lettering. I only had to upgrade to modern trucks and couplers (a project description is here: https://modelingthesp.blogspot.com/2013/07/returning-athearn-metal-tank-car-to.html ). I have not written, however, about the Athearn metal single-dome car of 12,500 gallons capacity, and that is the subject of the present post.
One scheme Athearn has repeatedly produced over the years is the yellow “gasoline service” tank car of the Southern Pacific. One of my upgrade projects for the plastic Athearn tank car was to make that model more accurate, primarily increasing dome height, as I showed in a post (it’s here: https://modelingthesp.blogspot.com/2014/04/modeling-sp-gasoline-tank-car.html ).
(History and extensive photography of SP tank cars, including the yellow gasoline scheme, can be found in my book on the subject, Volume 5 of the series Southern Pacific Freight Cars, subtitled “Hoppers, Covered Hoppers and Tank Cars,” Signature Press, 2008.)
But this yellow scheme was also offered in Athearn’s metal tank car line. A few years ago I spotted one of these models at a swap meet, and immediately bought it. You can see what good shape it is in.

The model has obviously been carefully handled and stored over the years, and it’s pristine. But it does have a couple of problems. First is that the modeler who built it put the body onto the frame backwards. The safety valves on the dome should be a the “B” end of the car (at left in the photo above).
The simplest remedy would be to unscrew the frame from the body, rotate 180 degrees, and re-attach. But this would likely wreck the ladder attachments, which are peened over into the running board. What would work is to move the handbrake to the other end of the car (and re-locate the brake gear). In that process, it would be desirable to replace the somewhat crude brake wheel. That’s what I decided to do, in combination with ignoring the underbody brake gear; it isn’t too visible.
A second problem is that the model has a dome walkway on both sides, whereas the SP cars only had dome walks on the left side. This is more difficult to correct without some surgery. Also, dome grab irons are missing. And finally, the SP cars had bottom sheets as well as the upper body in the same Colonial Yellow color, but the model has black bottom sheets. I decided to leave the problems along that required surgery or paint matching, and fix one problem that is easy to fix: the lack of any end lettering whatsoever.
End lettering was pretty easy to fix. The decal set that I designed, originally for Gerry Glow and currently available from Tichy (set #10052), is intended for transition-era SP tank cars and is available in either white or black lettering. Obviously this car calls for the black. Here is the end with its new lettering. All of this, including gallonage and SP class number, are from my Tichy set. 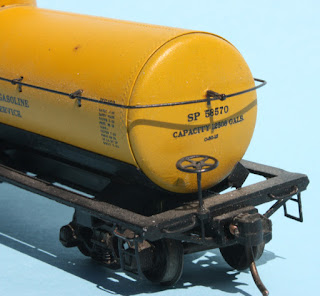 Also visible here is the oversize and unrealistic brake wheel (which will be removed), and the metal two-rung sill steps at the ends. Also evident are the nice stanchions for the handrail. This model compares favorably in details with many newer models.
I dug out a horizontal style brake wheel from my parts collection, added a phosphor-bronze wire staff, drilled a hole the same size in the opposite end sill from the one shown above, and cemented the staff in place. A little touch-up with black paint, and presto! we have reversed the location of the B end! while also adding a much better looking handbrake. Of course the brake gear underneath is now wrong, but it is closely attached to the center sill and not very visible, certainly far less visible than the handbrake staff.

Here you see again the nice two-rung sill steps, and of course the safety valves on the dome are now toward the correct, B end of the car, as intended.
Despite the shortcomings described above, I will be pleased to include this car in mainline trains on my layout. In that service, not even SP freight car experts would likely spot the inaccuracies, and I will have the pleasure of operating a true classic, at least 60 years old and possibly closer to 70 years old. In model railroad terms, that can be called “ancient,” and I’m glad to have it in service.
Tony Thompson
Posted by Tony Thompson at 11:20 AM