Greg Martin passed away this spring from complications of the coronavirus, and many people on different modeling lists expressed their memories of Greg, and their respect for his accomplishments. Prominent among them was certainly his leadership in the so-called “Shake ’n’ Take” (or S’n’T) series of kitbashing projects. Greg had this idea originally, and led the effort most years at the annual Prototype Rails meeting in Cocoa Beach, Florida.
Greg’s idea was that many modelers hesitate to kitbash or even to modify models, though that attitude cuts them off from both satisfying modeling efforts and from attainment of prototypes otherwise unobtainable. He was encouraged in this by Richard Hendrickson, as skilled a kitbasher as we have seen.
In the beginning Greg thought some projects would be easy enough that they could actually be completed during a clinic session or two at the Cocoa Beach meeting. This soon proved not quite possible, and in any case, would rule out almost any multi-step project, leave along painting.
Several kit manufacturers have donated car bodies and other parts as starting points, most notably Accurail, and several resin casters have produced replacement parts for some projects. Fifth Avenue Car Shops has produced decals for a number of the projects. The 40 people who make the Cocoa Beach sign-up get all these materials free, and hopefully go home and built what they received.
In the years since the first S’n’T project in 2006 (a rebuilt KCS box car), until this last January’s Santa Fe box car rebuild, there have been a wide range of prototype ideas. There were several refrigerator cars, a stock car and a gondola, and a bunch of box cars (some of them automobile cars).  A number were devised and produced entirely by Greg, but some have had other “leaders,” including John Greedy, Schuyler Larrabee, Fenton Wells, and John Barry. They have varied considerably in how much work or skill was required, but all have produced really nice models.
I decided to look through my S’n’T stash (I confess I have only built a little more than half of them so far) and wanted to build another one in honor of Greg. The oldest unbuilt one I had was the Hormel reefer of 2011, a John Greedy project using an Accurail wood reefer. (I can always use another meat reefer). And it’s a pretty straightforward build, much in Greg’s spirit.
The first part of the project is to remove the Accurail cross-bearers and make even deeper ones, using a separate piece of Accurail center sill. Here those new cross-bearers, which happened to be boxcar red, can be seen. (The white shape is the styrene pattern used to lay out the new parts.) 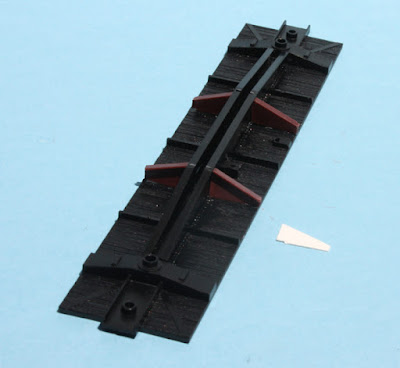 Brake gear was installed next, pretty much as intended for the Accurail model.
The next step, for me, was to carve off the ladder rungs (just the rungs) and grab irons from car sides. The rungs are removed but not the stiles or the bolt heads on the stiles, so that new free-standing rungs of 0.015-inch styrene rod can be added. I used a ground-down X-Acto chisel blade for this, which you see here just cleaning up inside the stiles (though it’s a little hard to see on the unpainted white styrene car side). The siding grooves are then re-scribed. 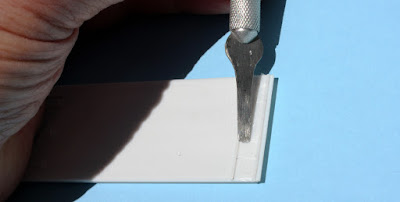 Once the new rungs were installed, the ladder looked pretty good. Spacing is not perfect, but this is a close-up photo. It’s virtually undetectable at normal viewing distance.

Last, the roof needed work. The S’n’T kit directions describe removing the original Hutchins ribs and replacing them with 13 flat styrene strips for a conventional outside-metal roof. But prototype and finished model photos only show 12 ribs, the same number as the Hutchins roof molding. I decided to thin the ribs down and remove the distinctive Hutchins bolt head and end closure near the outer end. I also replaced the corner grab irons with wire.
The molded plastic running board is a little too thick, so I filed the edges to make it look thinner. It also has minimal board joints. Real running boards were almost always made of multiple boards, and they got weathered, so I scribed the running board joints deeper to give that appearance. Last, I added the vertical-staff brake wheel to the B end of the car.
With these modeling changes, all the car parts were ready for paint. I will return to this project for the painting and lettering in a future post.
Tony Thompson
Posted by Tony Thompson at 11:02 AM