In a previous post, I showed some very nice, large loads for heavy-duty flat cars, that are produced by Multiscale Digital LLC through the efforts of Eric Thur. Should you wish to read that post, you can do so at the following link: https://modelingthesp.blogspot.com/2020/05/impressive-flat-car-loads.html . In the present post I address the blocking needed to ship one of these loads, a large Mesta Machine casting.
But before getting to the blocking issue, I have had a question directed to me about Mesta Machine Company and its products. There is quite a bit of history on line; in particular, I think an impressive look at the variety and size of Mesta’s products, is the 130-page book of 1919 that illustrates the range of Mesta products and the plant: http://www.archive.org/stream/plantproductofme00mest#page/n5/mode/2up .
Here is one example from the 1919 document, a 2000-ton steam-hydraulic press. The crosshead is the moving part in the middle, riding on four columns. There is a large steel bloom under the crosshead in this photo. But far heavier presses were built in later decades. 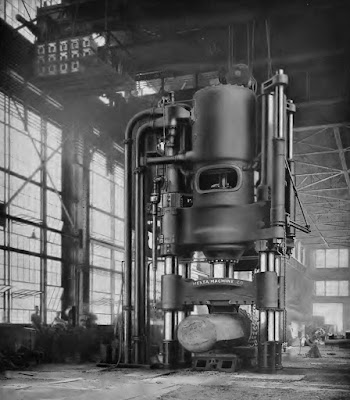 Crossheads much larger than what you see above, and more like the Multiscale Digital model I purchased, are well documented. Below is a brochure image of one such large crosshead being machined. The man standing inside one of the lightening holes provides scale. 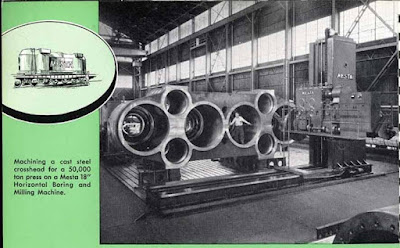 I happen to have an interesting photograph of large press parts like these being shipped, all on heavy-duty flat cars. The photo has no identified date or location (I am told it is Los Angeles), and is from the Union Pacific Museum (courtesy of and permission from Don Snoddy). It’s shown below. You can click on the image to enlarge it if you like. Note there is a brakeman at the handbrake on every car.

These are the parts for a large press, the crosshead on the nearest car and the base on the farther 4-truck flat. In between is a depressed-center car, and next to the locomotive is a regular flat car with some crates on it.
Note the sign on the nearest car, reading “Birdsboro Steel Foundry & Machine Co.” and on the second line, “from Bethlehem Steel Co., Bethlehem, PA.” This is the exact sign Eric Thur used on the flat car load I showed in the previous post (cited in the paragraph at the top of this post). Moreover, the same sign is on all four flat car loads.
Now let’s look at the nearest car more closely, to see the blocking. Here’s an enlargement. 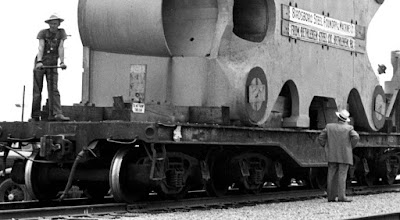 There are some fairly small boards underneath, perhaps 2 x 4-inch boards. More prominently, there are very heavy timbers at each end of the crosshead, one crosswise and two longitudinal in each case. A couple of bolt heads can be seen, suggesting that the timbers are bolted through the deck (these decks were provided with very many bolt holes for just this purpose). Finally, note the four coverings over the openings for the columns of the press.
I decided to go ahead and block my Mesta Machine Co. hydraulic press crosshead in the same way as what you see in the above photos. (My load is described in the post linked in the top paragraph of the present post.) I decide to use scale 10 x 10-inch stripwood for the blocking, as it looked generally like what you can see in the prototype photos above. I made a transverse piece at each end of the load, and a pair of longitudinal pieces, again as you see above, with bolt heads indicated.
Next I had to decide how to orient the load. I turned the crosshead on its side for loading. Set on its face, it would be too wide for the flat car, and the photos above show the crosshead on its side.
I also wanted to add closures for the four openings of the vertical columns in the assembled press, similar to what you seen in the large loads in the above photos. I used Avery Label 1/2-inch round color dots, spray painted a light tan color, for the closures, and with a timber across each opening. From mostly above (our typical model viewing angle), it looks like this at this point:

The load still needs a banner from the manufacturer, something permitted as an attachment for a temporary load. The Mesta company book (link in second paragraph of the present post) includes several photos of large loads on flat cars. I chose one of them, squared it up in Photoshop and improved the contrast. I may later re-do it in color, but for now B&W works okay.
The last thing to add was a “DO NOT HUMP” sign, invariably displayed on each corner of such loads for obvious reasons. I have in my stash a set of Jaeger HO Products “HO Scale Signs” and included are the desired signs. Note in the prototype photos above that they are just tacked to the blocking, which is how I show them here (you can click on the image to enlarge it).

This excellent 3-D printed piece makes an interesting load and certainly is one that would call for a 200-ton flat car to carry it. Like  many foundries and machine manufacturers, Mesta Machine has an interesting history, and it has been fun to learn about that background as part of preparing this load.
Tony Thompson
Posted by Tony Thompson at 11:07 AM