Part 1 of this pair of posts was about the prototype GAEX box cars, 50-foot single-door cars with DF (“Damage Free”) loaders, built by General American Transportation Corp. (GATC). This was part of their agreement with subsidiary General American-Evans Corp. jointly owned with Evans Products Co., builder of the DF equipment. You can read that post here: https://modelingthesp.blogspot.com/2021/02/the-gaex-box-cars.html .

As mentioned in that previous post, many of the 540 GAEX box cars were built with a prominent horizontal seam on the sides, but 340 of them were built with conventional vertical panels, 8 on each side of the door. The photo below shows an example (George Sisk photo, Charles Winters collection), drawn from the 110 cars built in the late fall of 1950 and leased to the Pennsylvania Railroad. 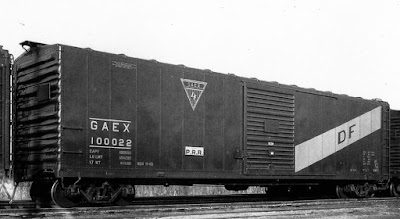 The Branchline Trains model of this car isn’t quite accurate; it doesn’t have the exact side sill contour of the prototype. The rest of the body, though, with 16-panel riveted steel sides, Improved Dreadnought ends, and diagonal-panel roof, does match the prototype. The paint scheme shown above is reproduced too. Thus the model is a good overall approximation of this GAEX car group.

Probably the most visible discrepancy is the trucks, which Branchline supplies as ordinary AAR trucks, but the prototype had the distinctive Chrysler FR-5E trucks with external hydraulic snubbers. The photo of the whitewashed truck below shows the appearance clearly (PFE photo, author’s collection). 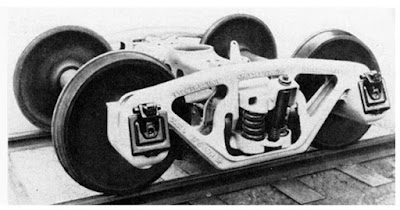 These trucks can be modeled, as I showed as part of modeling a PFE express reefer (that post is found at: https://modelingthesp.blogspot.com/2016/02/pfe-40-foot-express-cars-part-2-trucks.html ). For this GAEX car, however, I decided not to pursue that part of the modeling. (Maybe I’ll come back later and redo the trucks.)

Lastly, concerning the prototype, I want to show an illustration of the flexibility that was promoted for the Evans Products DF loader system. Shown below is a cutaway view of a car with quite a variety of cargo items, from boxes and crates to barrels and drums. All could be snugly loaded together and secured with combinations of crossbars and deck- or bulkhead boards. 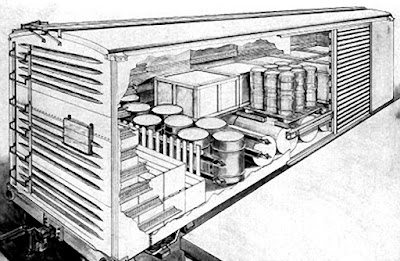 A comment about operation. As was indicated clearly in the MBA thesis I cited in the previous post, it was canned goods that seem to have been the cargo type benefiting earliest from loader equipment. So the photo below (Southern Pacific image N-5365-1), showing cartons of canned “Chicken of the Sea” tuna being secured in an SP DF car. is a typical use of loaders in the early days of the GAEX cars. 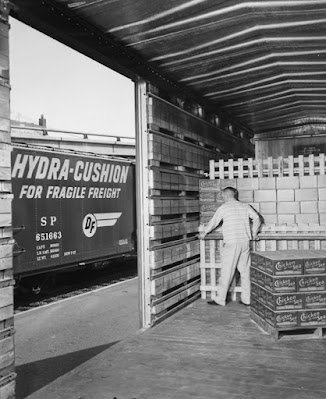 The Branchline Trains kit I mentioned is from their 1000 series, kit number 1020, for GAEX (several different road numbers originally supplied). It is a straightforward kit to assemble. I cannot resist also mentioning what a pleasure the Branchline kits are to assemble — I had forgotten in the intervening years since I last did one. And just because it’s straightforward, I will only mention here the things I did that were different than the instructions.

The first one was to replace the kit’s pin attachment of coupler box lids, by drilling through the lower box (that you glue to the floor) and tapping it 2-56. Then the pin on the lid is sliced off, its center dimpled, and drilled to clear 2-56. I did the same with the truck mounting hole, drilling through into the body and tapping 2-56.

Second, since I drilled through the floor to allow some screw length for the coupler box and truck attachments, the nuts provided for weight were relocated inboard of their designed location, attached with generous amounts of canopy glue. I have found this to be an effective adhesive in this situation. And third, I chose to attach the running board with canopy glue.

Everything else was according to the kit directions. In the photo below (note car number, compared to photo above), only light weathering remains to be done. You can click to enlarge if you wish.

This is a car with an interesting backstory, and I plan to operate it on my layout carrying canned goods, both inbound to my wholesale grocer, and outbound from my fish cannery. As mentioned above, there are indications that that kind of cargo was an important part of the earliest days of operations of the GAEX cars, and I will take advantage of that.