Since the pandemic began, almost a year ago, most modelers have not been able to attend or host operating sessions. For myself, I substituted operating sessions with my granddaughter, who likes the challenge and is quite a good and careful engineer with an NCE throttle. This last week, with her visiting us on a week-long school vacation, we did it again.

As we’ve done before, my wife Mary acted as conductor, and this time the session took place on the side of the layout containing the town of Shumala. As usual, they began by getting the waybills and a switch list organized, then went to work. In the photo below, you see Mary in the foreground, and the nine-year-old standing on a step stool behind her, just bringing back the cars that were picked up in East Shumala. 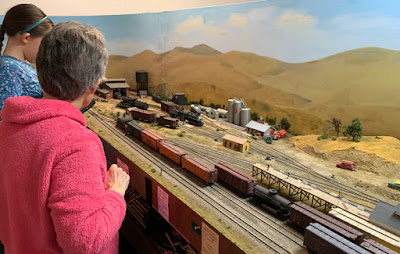 Here is one of the cars they spotted at East Shumala, a Euclid grader delivered to the team track. That’s Phelan & Taylor Produce in the background, and at right is the small freight shed at the team track, something Southern Pacific placed in some small towns. (My article about team tracks, and about building this shed, was in Model Railroad Hobbyist, the issue for August 2018; you can read that issue on line, or download it for free, at their website, www.mrhmag.com .) 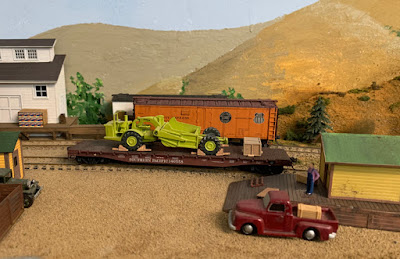 Having several sessions under their belts, these two worked together well and the session proceeded quite smoothly. Here is the switcher, about to run around the string of cars brought back from East Shumala. Mary is describing the next moves that needed to be made. 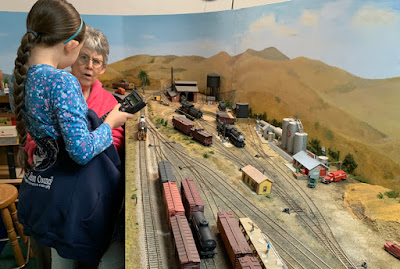 Toward the end of the switch job, the tasks were to spot the recently loaded reefers at the ice deck for initial icing, wait for icing, and spot them for pickup by the Guadalupe Local. Last task was to spot the propane car. Below you see the tidy yard, and the switcher on its last move. 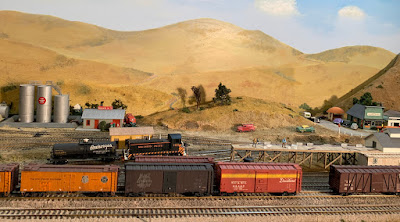 As always, it was fun for me to have a session to organize and prepare (and gave me a reason to clean a lot of track that has just sat for quite awhile, along with cleaning locomotive wheels). And of course it was great fun for the grandchild. She and I have now worked together to build three freight car kits of her own, and we always include at least one of her cars in each of the sessions she does. And it was definitely no surprise that fun was had by all.