A few years ago, I found an assembled B&O “wagon-top” covered hopper at a swap meet. Price was reasonable, so I bought it, recognizing that it wasn’t quite completed. It was lacking sill steps and the locking rods for the hatch covers, and part of the running board was broken. “Aha,” I thought, “this could be a freight car guy challenge.” (For more on that, you may consult my previous post on the subject: http://modelingthesp.blogspot.com/2019/10/whats-freight-car-guy.html ).

The model represents some 200 prototype cars that were built in B&O shops in 1940, with the same idea as the wagon-top B&O box cars and cabooses: the side ribs curved across the top of the car to support the roof. This eliminated the joint between sides and roof, a joint that often proved troublesome in house cars. These covered hoppers were Class N-34 on the B&O. They were built with wood running boards, and most of the cars kept those running boards all their lives. Here’s the prototype when relatively new (B&O Historical Society): 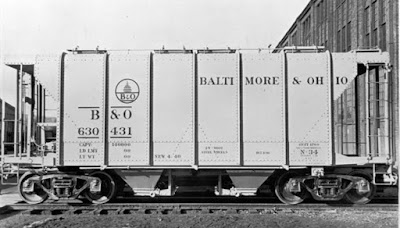 This car shows the paint and lettering that was on the cars when built.

The car I purchased had been built from a “West Shore Line” kit (Central Hobby Supply), a line of resin kits molded by Steve Funaro. The seller had included the kit directions and the left-over parts from the kit in the sale box.

Among those parts was a resin rendition of a wood running board. This was relevant to my model, because the original builder had chosen to add an overly thick resin representation of a steel grid running board, evidently also supplied in the kit. But part of that running board was broken off and missing, and as stated above, these cars mostly kept their wood running boards.

I began by stripping off the remaining parts of the steel grid running board. Here is the car at this point.

As mentioned, you can see that the model had not had any sill steps added (they were in the kit box, along with the original resin “wood” running board), nor are there any locking rods for the roof hatches. I decided to begin with what seemed like the most challenging problem, the sill steps. The challenge is that the frame near the car ends is quite narrow. You can see this below.

The sill steps, which are Delrin moldings with the correct two rungs (see prototype photo above), have attachment pins, as you see in the sprue below (These are Tichy parts, their part number 3045).

To attach these by drilling vertically into the sills would not be easy to get right, and if the resin is brittle at all, drilling thin-walled holes is treacherous. One solution would be to add a reinforcement strip behind the side sill to thicken it, providing more volume into which to drill, or perhaps to remove the attachment pins and glue on the sill steps as a butt joint with CA. I decided to do it a little differently. I first glued the steps to a length of scale 2 x 6-inch styrene. Canopy glue will work for these two materials.

When the glue had set up (I allow a couple of hours), the segments  of styrene strip can be cut to suitable length, then attached inside the side sill with canopy glue. This “sandwiches” the pins between the side sill and the styrene strip. Do keep in mind that you need left-hand and right-hand pieces if you want length in the final piece (see photo below). I found that this method worked, and when the glue had set up, seemed solidly attached.

Next I need to turn to details and corrections on the roof of the model, and of course match the paint, but I will take that up in a future post.