I had the good fortune to have my granddaughter visiting this last week, and as always, she was enthused to have an operating session on my layout. As we usually do, we just switched one side of the layout, but this time, we switched a full train of 8 cars, about the same as I would stage for experienced operators. There was a re-spot and 8 cars to be picked up, so a reasonable amount of work.

In the past, I have simply provided waybills for all the cars that were to picked up or spotted or re-spotted. This time, because the usual conductor sometimes gets snarled up with a fistful of waybills while also trying to plan the switching, I made up a switchlist. In previous sessions, I have tried to persuade the conductor to do the same, usually without result, and so this time I made the list.

The train for the branch line was already made up at Shumala, with the locomotive running tender forward as usual. Since there are no turning facilities on the branch, the engine crew decides which direction they want to run tender-forward. As many readers of the blog will know, interviews with SP crewmen who worked out of San Luis Obispo revealed that they wanted to run tender-first in the morning. In the afternoon, some drivers of autos had just come out of taverns and weren’t paying great attention at grade crossings, and in that situation you wanted to be running engine-first.

Here’s the train. I’m making sure all the switches are correctly thrown. You can see the locomotive, SP 2829, just beyond the end of the ice deck. The engineer, foreground, is ready to go. 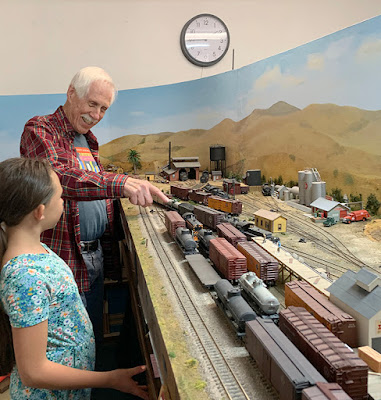 Next the train hauled out onto the Santa Rosalia Branch, and the first town on the branch that is modeled is Ballard. Here we are planning a move, with the train in two parts in the middle of our work. This photo shows us in the process of working the nearest tracks (the north side of the main track). 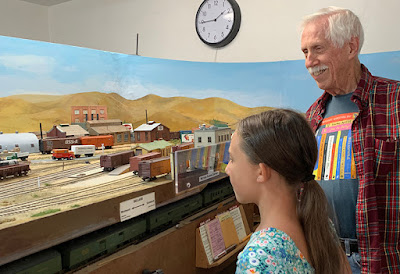 As we switched, first with the industries on the north side of the main track, then doing those on the south side, we steadily worked through the switch list. A car had to be re-spotted from one location to another, and there were a number of set-outs, some replacing cars that were picked up and some being single-car moves. But we got all the Ballards done.

Over at Santa Rosalia, one of the industries has moved. Back on April 1 of last year (entirely a coincidental reporting date), I showed a small scrap yard owned by Hohrn and Hooke. The post reporting on the creation of the industry is here: https://modelingthesp.blogspot.com/2020/04/adding-off-line-industry.html . But the problem with that location, up against the backdrop, was that the pile of “scrap” was almost invisible except as a dark mound. So the business changed locations, and is now at the layout front, as you see here. 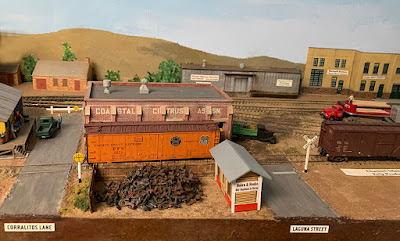 Back at Ballard, as is visible in the photo below, the locomotive has run around the train and is beginning to assemble all the outbound cars for return to Shumala. In that direction, the locomotive, seen here backing across Nipomo Street, will be able to run engine-first. I see that the caboose is still on the house track, where it was spotted during all the switching, so the train isn’t quite ready to depart. 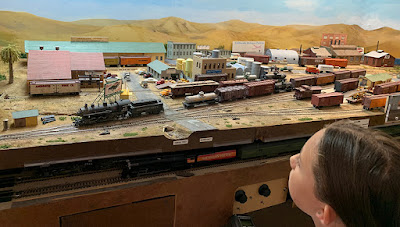 We got the work finished in a quite respectable amount of time, obviously a skilled crew! It continues to be fun to operate with my granddaughter, particularly as the pandemic seems to surging again, and she definitely enjoys it. She owns a couple of the freight cars that somehow find their way into each session she does, and that aspect is fun too. A nice experience on an otherwise slow summer day.

Posted by Tony Thompson at 8:20 AM