The full-width diaphragms adopted by Southern Pacific (and other railroads) for lightweight streamlined equipment present a modeling challenge in any scale. Not only are our model curves and switches far more sharply curved than the prototype, our car separations are much larger than prototype (the two problems are connected, of course). I introduced this topic in a previous post (see it at: https://modelingthesp.blogspot.com/2021/07/the-challenge-of-full-width-diaphragms.html ).

In this post I discuss various commercial diaphragm products that can serve on our model passenger cars. Two of them are shown below, on the left the Broadway Limited working Daylight diaphragms, the same as the ones on their ready-to-run Daylight cars. On the right is a package of the American Limited styrene versions of the same diaphragm, which although not operating in the same sense as the rubber-sheet ones, does provide some relative motion of an inner and an outer frame. 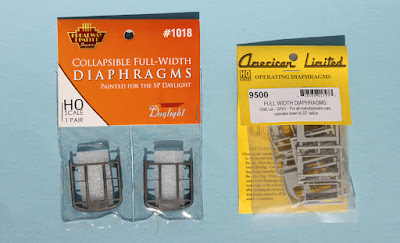 Incidentally, the Broadway Limited package costs about five times as much as the American Limited package; each will do one car. The BLI diaphragms are already decorated for the Daylight, while the AL parts are unpainted. I should mention that Coach Yard has intermittently offered working diaphragms also.

I assembled the pair of American Limited diaphragms shown in the photo above. These comprise the same core pieces (an “outer bellows” and an “inner bellows”) as their regular “Pullman” diaphragms that I have shown before (you can find that post at: https://modelingthesp.blogspot.com/2021/07/passenger-car-diaphragms-part-4.html ), and the core pieces are assembled the same way.

The difference from the “regular” AL diaphragm is the different, full-width outer or striker plate. That plate is sized to fit just inside an outer shell. In the photo below, I am holding the two parts sort of together. You can see the edge of the inner bellows. 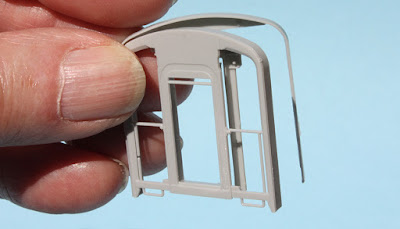 The intent here is to attach the outer frame-like part to the car body, and to attach the inner assembly to the car’s end door opening. That way it is free to move on curves, within the outer ring. Below is the drawing from the AL kit, showing how this is arranged. 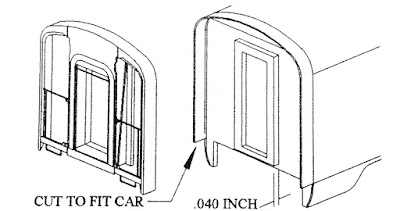 This would still need one of the distinctive face plates, as I showed in the preceding post.

The flexible, working BLI diaphragms shown in the upper photo are pretty impressive. Below I illustrate the point with a Coach Yard one, and at this angle you can see that its construction appears very much like the prototype photos shown in the introductory post (link in the first paragraph of the present post). It does not have a face plate, and that is a topic I will return to in a separate post. 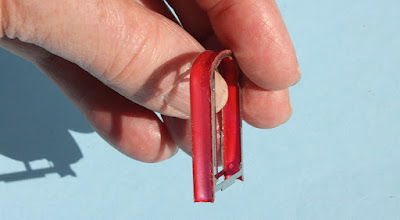 These working diaphragms compress with only a light force, which of course we want for HO scale passenger car operation. Below I photographed the same diaphragm, very lightly compressed on one side.

As mentioned, the Broadway Limited ready-to-run Daylight cars have working diaphragms. Below is one end of a Broadway Limited coach. Again, it lacks a face plate, and I will supply that later, but you can see how good it looks.

Actually, when you get one of these cars, the entire end surface is unpainted stainless steel, likely the best for rubbing against adjoining cars. In effect, the end piece of this diaphragms acts as a face plate in train operation. But I want to be able to run this at the end of a train, so have painted most of the end plate Daylight Red, and will add a face plate. 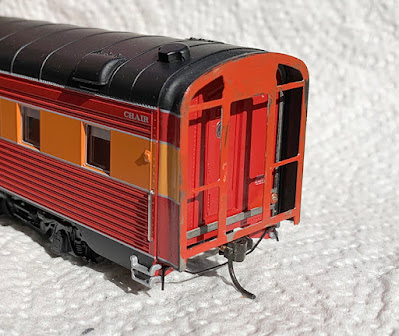 As just mentioned, any of these diaphragms need the distinctive face plates I showed earlier, if they may run at the end of a train (within a consist, these are not needed). A further issue that can arise with any full-width diaphragm is painting. I will pursue both these points in future posts.