In the previous post about diaphragms, I showed what stabilizer bars look like, both on a heavyweight car and on a lightweight Daylight car, and gave some prototype historical background. I then turned to the modeling approach I used for the “tall” face plates seen on some diaphragms of lightweight equipment after World War II. That post can be found here: https://modelingthesp.blogspot.com/2021/06/passenger-car-diaphragms-part-3.html .

To complete a diaphragm with use of face plates like the one I showed, I began with one of the American Limited kits for diaphragms. The best bargain in these kits is their no. 9686 (officially for Walthers Pullmans),  because it has material for six cars. 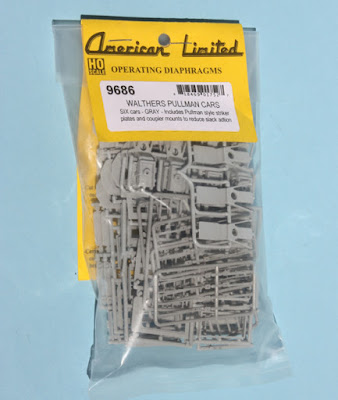 The one visual drawback to this kit is that the stabilizer bars are very slender. I have simply replaced them with brass wire, 0.035 inches diameter, attached with canopy glue (as is the face plate).

Shown below is a pair of the American Limited diaphragms, with brass wire substituted for the stabilizer bars and “tall” face plates added. One is right-side up, the other upside down. These will be painted SP’s Lark Dark Gray before attaching to the single-unit diner I showed earlier (see the post at: https://modelingthesp.blogspot.com/2021/05/mainline-passenger-cars-on-small-layout.html ).

The stabilizer bars here are too tight into the side of the diaphragm, but will at least be visible. For some cars, I will want to have the bars more outside the diaphragm sides. These American Limited parts also make up into nice diaphragms without stabilizer bars. I needed pairs like that for some of the head-end cars, such as various Ken Kidder “Harriman” brass models, that are in my fleet.

Once these kinds of diaphragms are built (I attach them to the cars with canopy glue), the face plates need to have a realistic look of mostly rust, due to wear against adjoining cars in service. Here’s a prototype example, SP 2341, photographed at Sacramento on May 31, 1962, by Bruce Heard (from  Southern Pacific Passenger Cars, Volume 1, Coaches and Chair Cars, page 255, Southern Pacific Historical & Technical Society, Pasadena, 2005). This is a detail of Heard’s photo. 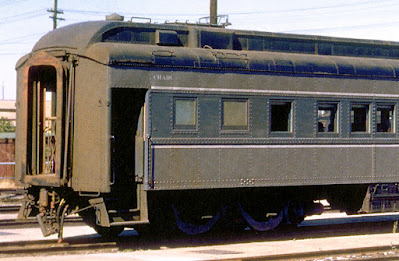 You can see the somewhat rusty look of the face plate. Of course, the degree of rust, versus body color paint, depended on time in service. Some face plates also looked as if there was a residue of grease on the plate. For my face plates, I have used Burnt Umber to depict old rust, while reddish rust like that shown above is closer to Burnt Sienna, and on most diaphragms I would combine the two colors.

For example, here is one of the “tall” diaphragms shown in one of the model photos above (brass wire stabilizer bars added), applied to my “relief” single-unit diner mentioned in connection with that model diaphragm photo, depicted at the end of a deadhead equipment move at Shumala on my layout. 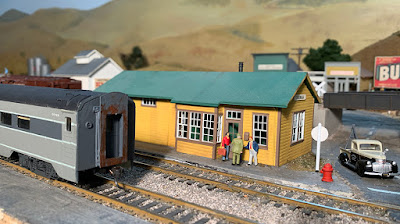 One of my “Harriman” baggage cars, a Ken Kidder brass model, is shown below with a virtually stock American Limited diaphragm, including the face plate (though stabilizer bars were omitted), but obviously painted body color and face plate rusted. 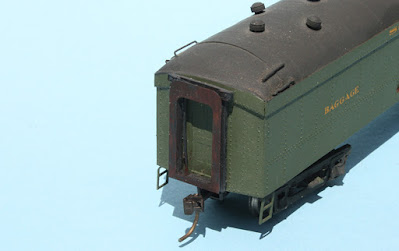 Of course most passenger cars in a moving train do not reveal the appearance of their face plates, but the last car in the train certainly does so, and to a lesser extent, the first car behind the power. I am going back through my passenger car fleet to make sure all diaphragms look realistic. But the kind of diaphragms shown in this post can’t portray the full-width diaphragms that SP used on lightweight equipment. I will return to that topic later.