Selecting cars for an op session

After my recent post about an operating session, I received an interesting question via email. The question was, how do I make the choices of cars that are in that particular session? (That post can be reviewed, if you wish, at this link: https://modelingthesp.blogspot.com/2021/06/operating-again-and-enjoying-it.html .)

Just to show an example, below is a snapshot taken awhile ago of part of the town of Ballard on my layout. I really took this for the industrial structure relationships, but of course there are a bunch of freight cars visible. So for the present discussion, imagine these cars as the “holdover” cars from a previous session. In an upcoming session, any one of them may be picked up; or equally likely, any particular industry may not be switched in the upcoming session, thus the car will remain where it is. 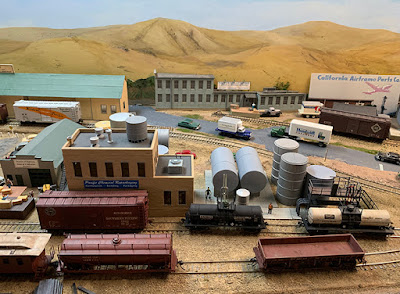 Moreover, when I set up my layout for an operating (or op) session, I not only choose cars on the layout which will be switched or not switched in the session, I also choose cars which move onto and off of the layout during the session, via the Guadalupe Local. In some cases, I may also, prior to an upcoming session, add or remove cars on the layout from a previous session, even though they didn’t arrive or depart by session switching. So, just as the questioner inquired, how are these choices made?

I have over the years used several systems for these choices. Even on my previous layout in Pittsburgh, PA, I devised and was guided by (though not ruled by) a car distribution schedule. This was pretty fully described in a post of mine some years back (see it at: https://modelingthesp.blogspot.com/2011/11/operations-demand-based-car-flow-2.html ). I have an updated version of this for the current layout, and do consult it from time to time, to keep my frequencies of car pickup and delivery consistent.

But the schedule really doesn’t have realistic meaning with actual operating sessions. That’s because it may be weeks or even months between operating sessions. No one, not even the layout owner, has a clear memory of exactly what happened in the previous session. So the new session really is not “the next day,” as a distribution schedule would have it. Instead, it is just some following day. The power of the schedule is to provide overall guidance, but it hardly needs to direct operation rigidly.

Instead, I modify overall patterns with respect to seasons and other factors, as I described in a previous post about “going beyond the schedule.” (That post can be found here: https://modelingthesp.blogspot.com/2016/09/car-flow-for-operating-session.html .) I was interested, in this context, to re-read my post from some years ago, giving advice about setting up operating sessions by giving a broad description of the process I usually followed at that time (that post is at this link: http://modelingthesp.blogspot.com/2015/06/how-i-set-up-operating-session.html ).

I should emphasize that not all cars follow a full cycle. An example of a car that was delivered on-layout as a load, but will not be picked up as an empty in a following session, is the gondola shown below on the team track at Ballard, EJ&E 32386. I inherited this car from Richard Hendrickson, including its glued-in load of pipe. So this car literally can’t be moved as an empty. Instead, it will simply be removed from the layout and returned to storage, prior to the next session. 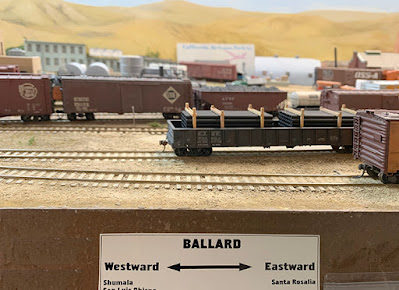 By way of contrast, here is a flat car that was spotted on the team track at East Shumala in our most recent op session. Because it has removable loads, it will likely be picked up as an empty in the next session. Regular readers may recognize the crate loads, described in a recent blog post (here’s a link: https://modelingthesp.blogspot.com/2021/06/open-car-loads-crates-part-4.html ). 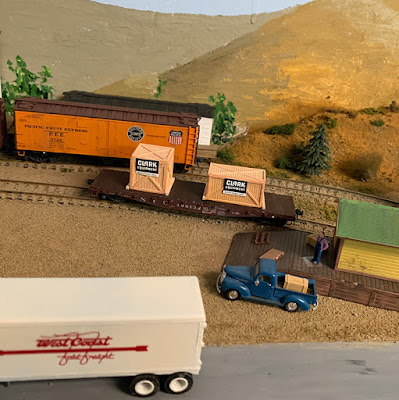 But the foregoing discussion only addresses whether particular industries or cars are switched. It doesn’t touch on the questions of selecting individual cars, for example emerging from storage for use. Which cars are selected? To some extent, that does depend on the car flow schedule. Let’s say the schedule (assuming I’m following it) calls for an inbound tank car of fuel for my cannery. When I look at my waybills for the cannery, there are only two made out for fuel cars, so either I choose one of them, or make up a new waybill for some other car.

In thinking about those “other cars,” I do make an effort nowadays to seek out cars in my fleet that haven’t operated for awhile, or even in some cases that have never operated on the current layout, and I make sure I have appropriate waybills for them. Then they can be worked into future sessions, either as cars arriving via the Guadalupe Local to the branchline junction at Shumala, or even placed at an industry to be picked up in the next session. This needn’t contradict the car flow schedule, but only implements specific cars to fulfill it.

This topic is one that continues to interest me, and I continue to think about ways to improve how I go about my car choices in setting up sessions. No doubt I will return to this topic in future posts.