More about vehicle and armor loads

Among the vehicle loads I have previously shown have been a number of military and armor vehicles (the latter often called Armored Fighting Vehicles, or AFVs). In the present post, I want to show some of these again, so I can illustrate the use of the Heiser chocks described in my previous post on this topic (see it here: https://modelingthesp.blogspot.com/2021/07/more-about-vehicles-on-flat-cars.html ).

(Many of the prior posts about AFV loads were part of a series about upgrading the Roco 100-ton flat car, and you can use “Roco flat car” as the search term in the search box at right to find them. But they also included extensive background material on the individual AFVs.)

Though the Sherman tank was at best obsolescent after the end of the Korean War in June 1953, it continued in service at a number of armor unit bases for crew training use. Accordingly, I can include these tanks as SP Coast Route loads in my modeling year of 1953. (For background on this tank and its successors, you may visit my previous blog post, which is at: https://modelingthesp.blogspot.com/2019/09/roco-flat-cars-part-7-armored-vehicles.html .)

Most Shermans weighed about 35 tons or so, perfectly suited for shipment on 50-ton flat cars (and numerous photos confirm that this was done). But a pair of them was considered a bit much for a 70-ton flat car, emphasizing the importance of the Army’s 100-ton flat cars. These two Roco model Shermans are shown in a train, riding on my upgraded Roco flat car.

Another vehicle I have shown before is the M7 howitzer, a 105-mm howitzer mounted on a Sherman hull, making it essentially a self-propelled artillery piece. These proved very effective in combat, far more flexible than towed guns, and were a valuable asset in both World War II and the Korean War. Here too, I have given background on these AFVs before (see my post at: https://modelingthesp.blogspot.com/2019/09/roco-flat-car-part-8-additional-armor.html ). 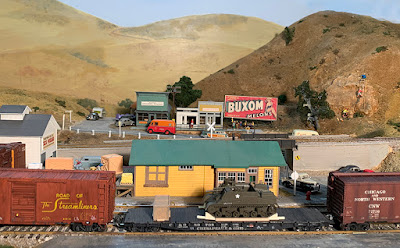 Another of the AFVs I have shown previously is an M36 tank destroyer. Though these were built upon modified Sherman tank chassis, their much larger gun required an open-top fighting compartment. (Here is a link to a previous post about these: https://modelingthesp.blogspot.com/2019/10/roco-flat-car-part-9-more-armor-loads.html .) Here again, I show this model to illustrate use of the Heiser chocks and boards. It’s riding on a Red Caboose 70-ton flat car, SP 140558, in a train entering the Shumala siding. 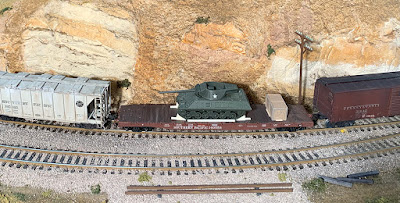 Of course, many military vehicles other than AFVs were handled by rail, including Jeeps and trucks. Here is a pair of Army trucks, on Proto2000 flat car ITC 1133, shown in a train on the Coast Route main track at Shumala on my layout. This model was originally assembled by Richard Hendrickson. This is a different view of a model that I’ve shown before.

And many other kinds of vehicles can be moved on flat cars too, of course. For an additional example, I used a Woodland Scenics road grader, adding wheel chocks and a box of parts, shown here at the team track on my layout at Ballard. It’s riding on a kitbashed Athearn flat car, modified to approximate SP Class F-50-15. 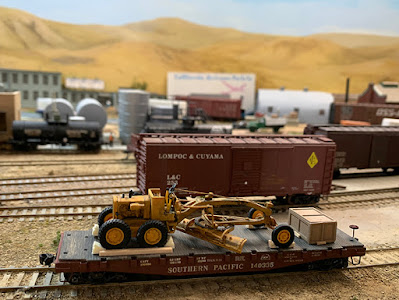 All these vehicles make interesting loads, almost too interesting, and I do operate them sparingly. But I have enjoyed learning about the individual AFVs, and the availability of the nice Roco models of them in HO scale obviously makes the modeling straightforward.