More about vehicles on flat cars

I have posted several descriptions of vehicles loaded on flat cars, and using the search box at right, with “vehicle load” as the search term, you will readily find them. In particular, I wrote a series of ten posts about upgrading a Roco “Army” heavy-duty flat car, 6-wheel trucks and 100-ton capacity, and choosing a variety of armor and other military loads. All those posts are most easily found using “Roco flat car” as the search term.

My topic for today is about an important part of such loads if they are placed on flat cars. That is the blocking required to immobilize these heavy vehicles on the flat car, while it moves over the railroad. There are many approaches that can be taken, including starting with the appropriate military Manual, but I just want to mention one of them. That is the set of parts from Heiser’s Models. I show below the label of the kit. Heiser’s is now in business as Lakewood Heiser’s Models. These do show up on eBay and other on-line sellers.

What is contained in this kit is two resin “sheets” of chocks, and two resin sheets of boards of varying length, and some short flat car stakes. The chock sheets, shown below, have two different angles, 31 and 38 degrees, with the steeper ones better for wheeled vehicles, the lower angles better for tracked vehicles. About half also have a short timber behind the chock, which would be nailed to the flat car deck to hold the chock in place. Obviously I’ve already used some from these two sheets. 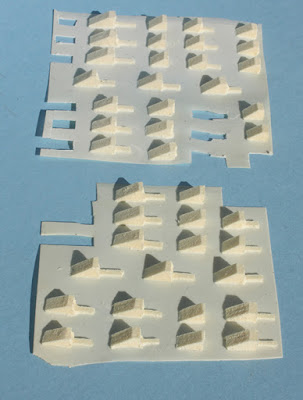 To further demonstrate what is intended with these chocks, I show below the Heiser directions, showing chock placement and use of boards alongside the vehicle. In previous posts, I have shown prototype views that illustrate these same features. (You can click on the image to enlarge it, if you wish.) 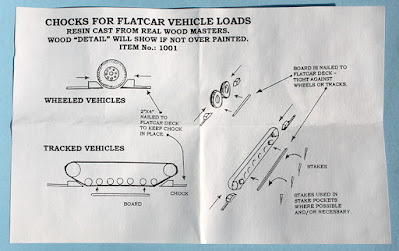 In the past, I have cut the chocks as 45-degree angles in a scale 6 x 6-inch timber, but these are pretty small. They really should be built up with a flat piece and an angled piece, so they have more height. I show below a pair of Roco Sherman tanks, with the one at left having the chocks cut from scale 6 x 6. I think it is obvious that the more substantial Heiser chocks at right are more credible looking. The tank at right doesn’t have the board alongside yet.

As I mentioned, the set of chocks includes steeper-angled ones that are more suitable for wheeled vehicles. Below I show a military tractor, a Herpa model. This one also is photographed to show the chocks, but boards will be added along the length of the wheels.

[Let me observe in passing, though I’m not remotely an expert on military vehicles, or even very knowledgeable about them, that I’m told this is an M931 tractor, a late 1970s vehicle. That’s long after my modeling era, but these vehicles were in fact rebuilt from M809 6x6 trucks that in turn came from the M39 series, a 1949 6x6 design first produced in 1951. The M809 series emerged from, but did not replace, the M39 designs in 1969. So I decided it’s not so severe a time warp to imagine this vehicle as an M39. Now wasn’t that admirably clear? Corrections or additions welcome.]

Of course, the same kinds of chocks can readily be made from stripwood, and setting up an assembly line to turn them out in quantity would work fine. But the Heiser chocks are definitely a shortcut, and I enjoy using them for a variety of vehicle loads. I will show more of them in a future post.