This title, “Trackwork wars,” may remind some readers of an ongoing series in this blog, called “Electrical wars.” (You can use either phrase as a search term in the search box at right, if you would like to see some of the earlier posts.) But here I focus on trackwork. My latest challenge has been in connection with my staging table, as explained below, and as so often is the case with largely complete layouts like mine, it’s a maintenance problem.

This staging table is an idea I got from John Signor, who has one on his own layout that is 16 feet long, and who wrote about it in an article for Model Railroader (for more background and description of this, you may consult my post at this link: https://modelingthesp.blogspot.com/2010/12/staging-trackage-installation.html ).  Below is an end-on view of the table currently, showing ten of the twelve tracks (despite how it may look from this camera angle, it really is level). 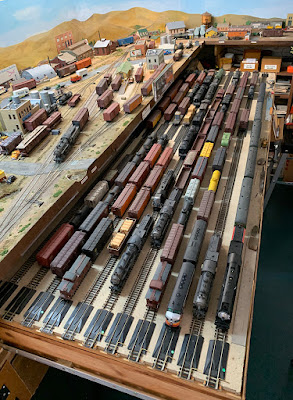 The track at each end of my staging table has a rail-alignment device, copied from a Roger Nulton idea, that permits the tracks on the table and on the adjoining layout to align perfectly. I showed a photo of Roger’s device, and the implementation on my layout, in a previous post (you can see it at: https://modelingthesp.blogspot.com/2017/10/mind-gap-part-2.html ).

Part of the alignment at each end is half of an Atlas re-railer, to protect against derailments as trains enter the staging table. Below you see one of them, disassembled from the track on the table, in preparation for repair. That’s the table edge at right. You can also see the brass tubes soldered to the outside of the rail end on the near side of each of these two tracks, and on Track 2, above, you also see the latching rod that slides into a matching tube on the layout side.

The problem that had developed is that the rails at the right end of the Track 1 re-railer, foreground, have become detached from the plastic ties. 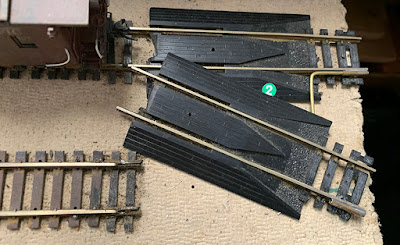 Incidentally, the more “experienced” readers may recognize the track at left as fiber tie strip! I had forgotten that an old piece of such track had been pressed into service on the staging table.

My plan to correct the problem in the end section was to remove the inoperative plastic ties, and solder the rails to copper-clad PC board ties. I had some of those ties on hand, but they were old and one of them had recently exhibited debonding of the copper cladding when soldered. I decided to use new ones, and purchased CopperHead 1/16-inch PC board ties from Fast Tracks (view this product at: https://www.handlaidtrack.com/copperhead ).

I cut several ties to about the right length, notched the copper cladding on both sides with a file, tinned one side and also tinned the bottom of the rails you see above (these are the normal steps for a job like this). Then it took only a touch of the iron to  make each joint. Here is how it turned out: 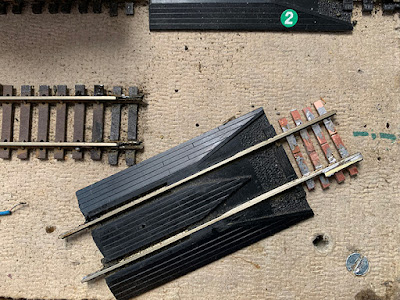 This end section was then re-installed as it had formerly been installed, and the right-hand edge of the staging table then looked as you see below, with the repaired ties in the lower right corner of the photo. 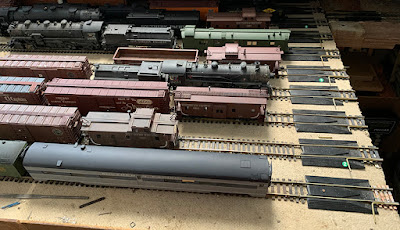 In the foreground, on Track 1, is my streamlined SP relief diner, bringing up the rear of a passenger extra. At the top of this image, on Track 6, you see a 2-10-2 assigned to some kind of test run, with a dynamometer car in tow. Other tracks contain various other mainline trains.

With this change, the track gauge at the end of this staging track is solidly maintained. My first tests of the repair have worked fine. Now the test will be whether this is a sufficient fix with repeated operation, or if something more may be needed. But it may be awhile before I know that.

Email ThisBlogThis!Share to TwitterShare to FacebookShare to Pinterest
Labels: Maintenance, My layout, trackwork