Like all layouts intended for operation, I need staging for mine. I’m pretty constrained for space, so turned to a clever idea from John Signor, which he published in Model Railroader years ago (“Railroading in a Drawer,” Model Railroader, December 2000, pp. 112–114). This idea is essentially a transfer table on drawer slides, with the slide motion perpendicular to the tracks, but here the multiple tracks are on the moving table. The table tracks can be aligned with single entrance and exit mainline tracks.
John’s table is pretty large, 16 feet long, while my table can only be 7 feet long. So I compromised on his design by only using a pair of drawer slides. I went on line and bought the same heavy-duty, “no slop” slides that he recommended in his article, the Accuride model 3600, available in a variety of lengths and weight capacities. I had the opportunity to visit John’s layout and see the installation first-hand, assess how it operates, and get suggestions from John. He felt there was little to add to what’s in the magazine.
I designed my table to be 30 inches wide, permitting 12 staging tracks. This is probably more than I need, but we all know the mantra, “you can’t have too much staging,” and based on previous experience, that will probably prove to be true.
Building and installing the table was pretty straightforward, but there definitely is some pivoting freedom of motion, around a vertical axis through the table’s center. This means that track alignment needs some kind of positive lock between the table and the rest of the benchwork. John used a switch machine to insert a pin into an indexing hole. I decided to use a manual lock in the form of a conventional barrel bolt, purchasable in any hardware store, which is installed on the adjoining benchwork, and an aluminum strip along the end of the table, with indexing holes drilled in it (spaced at the track spacing).
Here’s an edge-on view of the installed table, with the slides between the back-to-back L-girders. This photo was taken before the attachment to the benchwork was screwed down, thus the bar clamps holding the lower L-girders in place. The backdrop visible above the table, incidentally, is intended for an upper level of the layout, which will be located above the staging table. 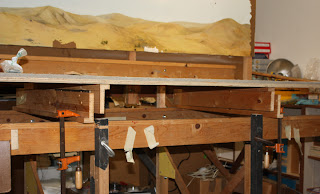 It soon developed that although my locking arrangement at one end of the table controlled that end very well, it did not entirely lock the other end. There seemed no alternative to duplicating the barrel bolt and locking strip on that end too, which is what I’m now doing. Once that progresses and is tested to my satisfaction, I’ll report further. But I can already operate trains over the table, to and from mainline track at each end, so I’m confident it will work well.
Tony Thompson
Posted by Tony Thompson at 7:14 PM