In this post I describe a simple fix to a widely owned HO scale tank car. This fix, though far from correcting all its faults, does correct what I believe to be the most visible one.
This is the plastic tank car originally sold by Varney, then for some years by LifeLike (before the days of Proto2000) with an even worse frame molding, and finally by Walthers. To Walthers’ credit, they considerably improved the frame, but repeated very nearly the same tank. The most visible defect to me is the immense manway atop the dome, which for some reason is modeled with huge hinges as well as being fully twice the diameter of the manway it is supposed to represent.
The tank is also pretty big, around 11,000 gallons, and probably was scaled up from some smaller prototype so it would “have presence” or something. But for now I will just look at the manway problem. Here is how it appears originally, in the version sold by LifeLike: 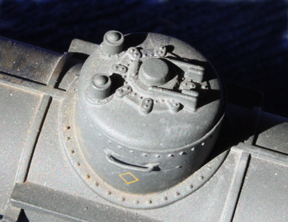 This is actually pretty easy to correct, by simply carving or filing off the offending part of the dome top, reducing it to a smooth contour. It would then look something like this (safety valves, though not well detailed, were left in place; note that fine sanding to remove filing scratches remains to be done): 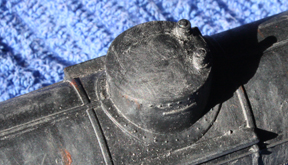 Now a replacement manway cover, of correct size, can be added. The Tichy tank car detail set contains both the post-1922 “approved manway” and also an older type of screw-thread manway cover, a type which was permitted to remain in service for cargoes which would not develop significant pressure in transit. Since most of my tank cars have “approved manways,” I decided to use the screw-in type to represent an older car. Here’s the result for a Walthers car, with an unaltered LifeLike car on the adjoining track: 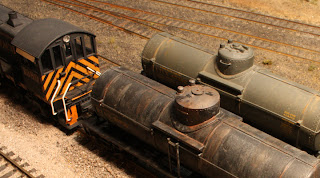 Though the resulting model still falls short of current standards of freight car modeling, at least (to my eye) it no longer advertises its shortcomings quite so loudly. After all, the upper parts of freight cars are what we see most clearly on the layout, and this corrects the topmost problem on the car!
Perhaps I should mention that on my layout, cars are classified as either “mainline only” or suitable for “all service.” The idea is that cars in passing trains on the main line are really not individually examined by onlookers, and stand-ins or poorer models can serve acceptably in that environment. But any car in the “all service” category, which will undergo switching and other opportunities for a closer look, has to meet a higher standard. The corrected manway on this tank car doesn’t rescue it from its “mainline” classification.
Tony Thompson

Posted by Tony Thompson at 3:44 PM