Some of you will know that I’ve recently published a couple of articles about improved model waybills (the magazine citations are given below). The point of these waybills is to provide operators on the layout a more prototypical waybill, particularly one which permits the flexibility of operation of “free-running” cars like box cars. Too often, the widely-used four-cycle waybill contains little information and worse, resides in its car card pocket forever. That’s just not how prototype free-running cars were used on the railroads.
My waybill was produced by cutting and pasting the entry boxes and their labels from a prototype waybill. This helps create the right “look and feel,” as well as providing space for more information. The Railroad Model Craftsman article described this process and showed examples. But I was still not entirely happy with the product. It failed to reproduce the prototype’s lengthwise division into shipper and consignee parts, and did not have enough space to give routing details. Prototype waybills not only show all the railroads over which the shipment will move, they also show the junctions at which interchange will take place. The latter is vital in returning empty cars via their service route.
I’m attaching below my newest version of the prototype waybill so you can see how it looks. I expect to post more about these waybills and how they’re made, as well as some comments about how I use them on my layout. You can see some examples in both the articles cited below of filled-out waybills and of the corresponding model freight cars on the layout.
Here are the articles published so far (another one is pending at The Dispatcher’s Office for 2011):
“Prototypical Waybills for Car Card Operation,” Railroad Model Craftsman, December 2009, pp. 71–77.
“Contents of a Waybill,” The Dispatcher’s Office (publication of Operations SIG), April 2010, pp. 17–24.
Tony Thompson 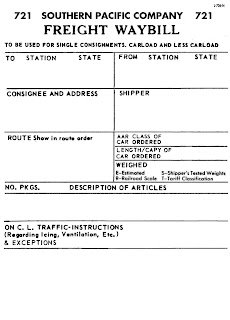