One of the upgrades I’ve been working on is to correct the oversize valve cover or bonnet on the Athearn “chemical” tank car. (Though often called a “dome,” it’s not an expansion dome but an enclosure for valves and piping connections for filling/emptying these pressurized tanks.) Like the platform around the bonnet, and in fact most of the car, it’s considerably oversize. I’ll be reporting this in more detail in my tank car talk at Cocoa Beach next month, and will post further here.
I show below a photo of the Athearn bonnet, with platform removed, followed by a photo of the same car with a replacement scale-size bonnet, which is Precision Scale’s part #31005. The difference is pretty evident. (Note also in these two photos that Athearn has used the riveted-tank bottom sheet--all those rivets should be removed for an insulated and jacketed car.) As a basis for comparison, I also show a prototype photo of a car of this size (around 11,000 gallons—an AC&F photo courtesy of Ed Kaminski), and a photo of an unmodified Athearn “chemical” tank body. 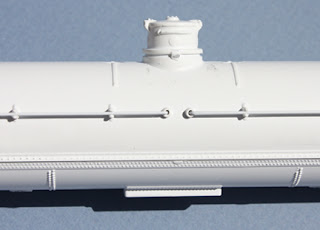 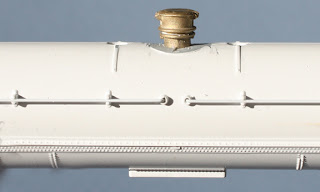 Whether or not the car you are modeling has a platform around the bonnet or merely a walkway (like the prototype car shown), the bonnet size needs to be corrected for these cars to look “right.” And this is an easy fix. I will post later on my completed model, and on the problems of correcting the Athearn dome platform if your prototype needs one.
One last comment: isn’t this just a poor version of the recent Atlas HO scale LPG cars? Well, kind of, but not exactly. The Atlas car is about the same gallonage but is a somewhat shorter and fatter tank, and has an AC&F underframe, while the Athearn car has a General American underframe. To me, they are different cars and for variety, I want both models in my population of tank cars.
Tony Thompson
Posted by Tony Thompson at 12:46 PM