There’s a general issue faced by all modelers who attempt to reproduce prototype car fleets: which cars to model, and how many. If a particular car type was commonplace on the prototype you model, then of course you’ll want to model it, whereas a car which was rare or non-existent on your prototype would be a poor choice. And beyond that, let’s say for a commonplace car, how many should you have?
I touched on this in my post about Upgrading old models, in suggesting that the numbers of prototype car classes should guide the numbers of cars you model. In this post I go farther with that idea, choosing a specific prototype car important to my layout: Pacific Fruit Express refrigerator cars.
I realized some time ago that the PFE car fleet, totaling about 40,000 cars in the era I model (1953), could be modeled by doing 1 car on my layout for each group of 1000 prototype cars, meaning I’d have about 40 PFE models when I was done. This was a big number but not unreasonable for my total car needs and space.
Then the choices of cars and car classes is fairly easy. I simply looked at the 1953 Official Railway Equipment Register or ORER (conveniently available as an NMRA reprint) and tabulated the PFE fleet, omitting very small car groups as well as a few unusual cars which might be hard to model. I listed rebuild car classes by both capacities, so “R-30/40-19” means the combination of R-30-19 and R-40-19 cars. Here’s the result. 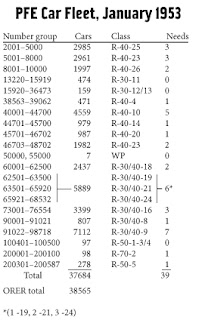 You’ll note the right-hand column shows how many cars I chose to have of each number group, by car class. The only inconvenience is that PFE by this time had lumped together classes R-40-19, -21 and -24, but they can be proportioned by how many cars were originally in each class (see asterisked footnote). Note that the total of cars evaluated is 37,684 out of an actual total PFE roster of 38,565, so I didn’t omit many cars in my simplification. And overall, the right column totals tells me I’ll need 39 PFE models.

I probably won’t stick to this division by car classes rigorously (I already have too many InterMountain Class R-40-23 cars), but this definitely provides guidance in what to build or buy, and almost more important, what not to build or buy.
This same approach can be used in a bigger arena by identifying which freight cars one needs from foreign roads across the country, but I’ll save that for a future discussion.
Tony Thompson
Posted by Tony Thompson at 11:34 AM