The challenge of full-width diaphragms

The full-width diaphragms adopted by Southern Pacific for its new streamlined equipment in 1937 and thereafter pose an interesting modeling challenge. Certainly to install and successfully operate such diaphragms in model form, with the excessively sharp curves and switches on nearly every layout (relative to prototype), is quite difficult. And this applies to other railroads, too, but I will only address the SP issues here.

Of course, SP and others who used these diaphragms did so for the appearance. Here is an SP publicity photo from 1941, showing new Lark cars. You can see how the joint between cars is completely hidden, and that the paint scheme extends across the joint (Steve Peery collection). The whole train would look like all the cars were articulated. I illustrated that point in a previous post (see it at: https://modelingthesp.blogspot.com/2021/06/passenger-car-diaphragms-part-3.html ). 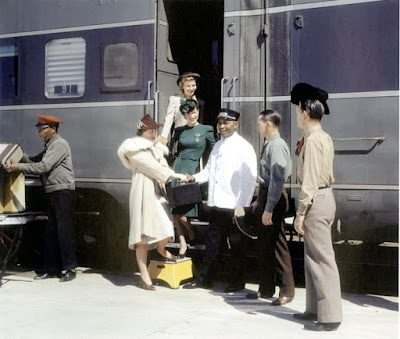 Modeling these diaphragms involves two challenges. The first is to duplicate the appearance at the car sides, with the flexible outer part of the diaphragm. I’ll return to that in a moment. The second is the face plate.

Especially with Pullman’s lightweight equipment built before and just after World War II, a distinctive face plate was used for the diaphragm. The photo below shows the end of a Pullman built for the Golden State in 1947 (its color is Simulated Stainless Steel, as was the lower half of these cars in their original paint scheme). The photo is taken from the definitive history, Southern Pacific Passenger Cars, Vol. 2 (“Sleepers and Baggage-Dorms”), SPH&TS, Pasadena, CA, 2005), from page 338. We get a full-face view of the shape (Steve Peery collection). This face-plate design has been called the “opera window” version. 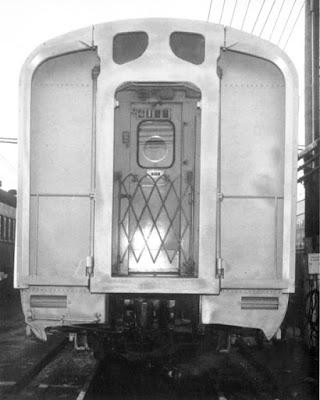 An angled view of this type of diaphragm shows the diagonal stabilizer bars, a newly introduced feature of diaphragm design with lightweight Pullman equipment (Rob Evans collection). I described these bars in the same post that is cited above the color photo at the top of the present post. This view also allows you to see other features of the side extensions around the periphery of the entire full-width diaphragm. 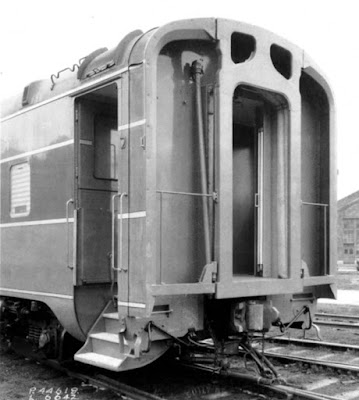 Finally, of course, we need to remember that in-service face plates got rusty, due to rubbing against the mating diaphragm during operation. I discussed this in a previous post, and showed model as well as prototype examples of face plate appearance. Shown below is a good illustration, a painting by the late Ernie Towler (which he gave me permission to use). It was created for the Four Ways West book, Southern Pacific Passenger Trains (Volume 3), “Night Trains of the Coast Route,” by Dennis Ryan and Joseph Shine, 1986. 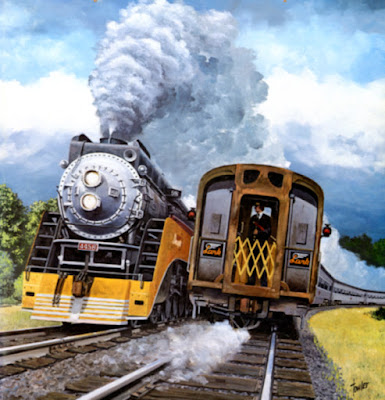 The painting depicts the eastward Daylight, heading from San Francisco down the Peninsula at Burlingame behind a GS-5, passing the inbound Lark. The Lark’s observation and two rear sleepers had been cut off at San Jose for their trip to Oakland, thus showing us the rear of another sleeper — and of interest here, a fine view of the face plate of the full-width diaphragm.

As I mentioned, there is a second challenge for the modeler, depicting all the hardware of the full-width diaphragm (see the third photo from the top of the present post), and if possible, making it flexible so it can operate on model curves. I will return to both that challenge, and the face plate issue, in future posts.