In the previous post on this topic, I showed how I chose the diaphragm length (parallel to the car length), and a little about the “bare bones” diaphragms found on some head-end equipment after World War II. You can view that post at this link: https://modelingthesp.blogspot.com/2021/05/passenger-car-diaphragms-part-2.html . At the end of that post, I mentioned “stabilizer bars,”  sometimes called tension bars or anti-rattle bars. What are these?

One of the earliest photos I have found of these bars being installed on a conventional heavyweight car is shown below, a Pullman image dating from 1940. You can see here how prominent the bars can be, and it certainly would not be acceptable to omit them on a car that ought to have them. 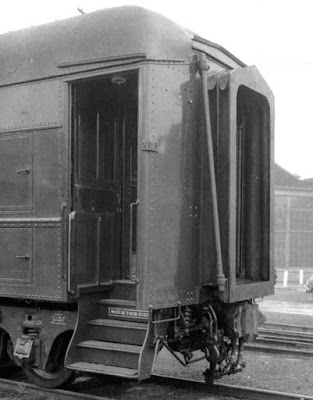 These bars seem to have been introduced with the first non-articulated lightweight equipment built by Pullman,  about 1937, though as late as 1933, heavyweight Pullman sleepers were still being outshopped without these bars.

Here’s some  history. In 1934, Pullman’s first lightweight train, an articulated design, was delivered to Union Pacific. The intent was to make the train look really streamlined, not only with smooth external contours, but with no visible gaps between cars. One uncomplimentary description was that the train looked like “an enormous worm.”

The photo below shows the City of Portland, the second UP streamliner and the first to be diesel powered, numbered M-10001 ( Union Pacific photo, courtesy Don Snoddy). The train was fully articulated, and sheet rubber concealed the gaps between cars. But the train’s cars were normally kept together, so the usual diaphragm arrangement wasn’t needed. It is shown painted in the yellow and “autumn brown” scheme.

The inconvenience, particularly the inflexibility, of a fully articulated train soon led UP to articulate only  a few pairs of chair cars in the new City of Los Angeles and City of San Francisco trains of late 1937.

Meanwhile, Southern Pacific had received the first Daylight consist, entirely equipped with full-width diaphragms. (I will say more about the full-width diaphragm challenges in a future post.) The stabilizers in these diaphragms were mostly hidden by the design, but on the chair-baggage cars at the head end, the “wings” were omitted and the equipment could be seen (Pullman-Standard photo, Steve Peery collection). 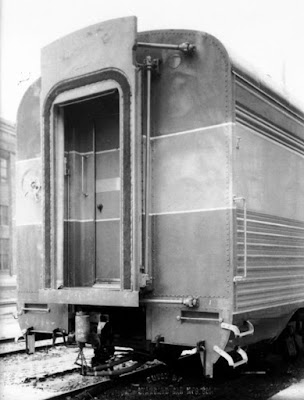 Note that there are horizontal stabilizers at top and bottom, and a vertical one, running diagonally from top to bottom. These stabilizers tended to keep face plates of adjacent cars in contact, which not only reduced motion and noise between cars, but maintained a smoother passageway for the passengers.

Prominent in the above photo is the fact that the face plate is quite tall, as high as the roof line. In later years, when many of SP’s cars with full-width diaphragms had them removed, the remainder looked much like the photo above — with an important exception: the horizontal stabilizer bars were removed, leaving only the vertical one. Here’s an example, in this case the diner end of a Shasta Daylight articulated coffee shop-kitchen-diner, photographed at West Oakland in October 1961 (Don Munger photo). 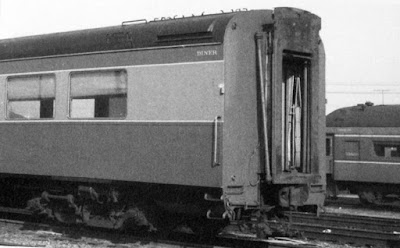 So the cars with remnant full-width diaphragms looked like the above: really a standard-looking diaphragm, but with tall face plate and stabilizer bars. That’s relevant to a range of cars, because diaphragms like this were installed on head-end and other cars operating in consists with lightweight cars so equipped, even in the days when full-width diaphragms were still in use on cars that originally had them.

These are not hard to model; simply make a face plate that looks like the above photo, add to any ordinary model diaphragm, and add stabilizer bars. Below is my styrene pattern for the tall face plate, next to the regular Pullman face plate pattern made earlier. 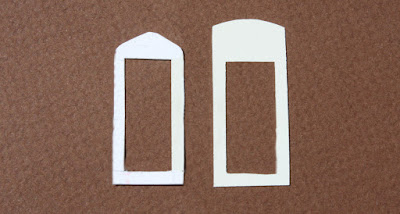 I will return to the topic of diaphragms, particularly full-width diaphragm issues, for additional lightweight equipment in future posts.

Posted by Tony Thompson at 8:41 AM