Late last year, I wrote a blog post about Car Distributors, the railroad job title of the person (or crew) that arranged to fill requests for empty cars that were needed to be loaded. That post can be found at the following link: https://modelingthesp.blogspot.com/2020/12/whats-car-distributor.html . In the present post, I want to add some details relevant to Southern Pacific, which I model.

There was a short article in the SP employee magazine, Southern Pacific Bulletin, in the issue for September 1951 (excellent timing for those us modeling the early 1950s SP). It took the interesting approach of beginning with the kind of job description that might appear in a “want ad,” and here is the graphic they used (you can click on the image to enlarge it if you like). The text of the article then described more about the job, and I quote it below the graphic. 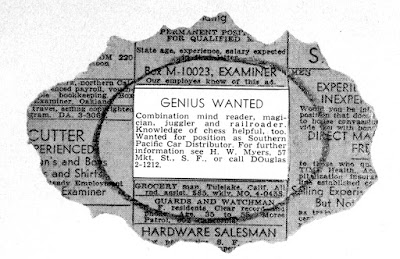 “Suppose you were faced with the responsibility of providing from thirty to forty thousand freight cars to our customers each week. How would you go about it? Where would you begin? Where would you get the cars, and how would you get them to the designated place at the right time? These are some of the questions our Freight Car Service staff must be able to answer in order to give our shippers the kind of service they expect.

“Car distribution, both freight and passenger, is under the general supervision of C.H. Grant, general superintendent of transportation. The Freight Car Service is under the specific direction of L.J. Lyons, superintendent of freight car service, who reports directly to Grant, headquarters in San Francisco. Lyons supervises and coordinates the work of car distribution within Pacific Lines.

“Each of the ten railroad divisions comprising the Pacific Lines of SP has a car distributor, with the exception of the 550-mile long Salt Lake Division which has two car distributors, one located at Ogden and the other at Sparks. On the Portland Division, where thousands of carloads of lumber are shipped each month, the car distribution force is under the direction of G.M. Leslie, assistant superintendent of freight car service in Oregon.”

The article then went on to name all the individual car distributors, which isn’t terribly interesting in itself, but it did give the locations  (yards) where each car distributor worked. They were as follows: San Francisco, Oakland Pier, Sacramento, Ogden, Dunsmuir, Portland, Bakersfield, Los Angeles, Tucson, El Paso, Sparks, and Stockton. These would be among, but not limited to, the locations from which needed cars would be sent out to local agents who requested cars (I described that process in the previous post, cited in the first paragraph at the top of the present post). The article continued:

“It is the duty of the division car distributor to receive local car orders from agencies located on the division and arrange for movement of empty freight cars over that division so as to strategically place the empty equipment for availability and prompt application of car orders received.

“The routine work of the car distributor is often complicated by sudden demands for specific types of freight equipment on request from the armed forces for the movement of war materiel, including tanks, guns, trucks, ammunition, and other paraphernalia. These government orders must be filled 100% and frequently orders involve large numbers of cars to be spotted on short notice. This requires close liaison between the staff of the general superintendent of transportation at San Francisco and the divisions along the line so that such equipment can be gathered up and made available at the specific point of loading.

“During certain times of the year there is a tide movement of empty cars over the line toward areas where seasonal products are produced. Grant’s staff must closely supervise the movement of these empty freight cars since both the seasonal demand and the normal area demands must be met. The staff manages these economies through their complete knowledge of average seasonal loadings along the lines.

“Daily contact with the divisions is maintained by car service headquarters at San Francisco, both through telephone and telegraph, and daily situation reports indicating the numbers of freight cars, broken down by categories, located on the divisions or moving between divisions. It is through this constant contact between headquarters and division car distributors that an even tide of equipment is maintained consistent with car orders to meet peak seasonal and normal demands throughout the year.

“When it is necessary to return empty freight cars to home lines and there is no loading for such cars to or in the direction of that home line, Grant, through his car service staff, issues the necessary orders to move the foreign owned freight equipment off the Southern Pacific in order to eliminate unwarranted expense due to per diem payments.

I found it interesting to read this “layman’s description,” as we might say, aimed at the general SP employee, and thus rather general, yet giving some interesting details about how SP car distribution was managed. It’s just one more example of the prototype environment we need to understand, even if we don’t wish to duplicate it entirely.