Once again, I want to show some interesting waybills from Andy Laurent’s collection, and I have to thank him again for his generosity in sharing these. Today’s waybills have been chosen, as will become obvious, for a variety of reasons.

First. a waybill from a railroad you may never have heard of: the Alabama, Tennessee and Northern, a modest-size railroad at one time extending north from Mobile, Alabama about 220 miles to a junction with the GM&O west of Tuscaloosa. I apologize that it is photographed at a bit of an angle, but that won’t impede reading and interpreting it (you can click on the image to enlarge it, if you wish). 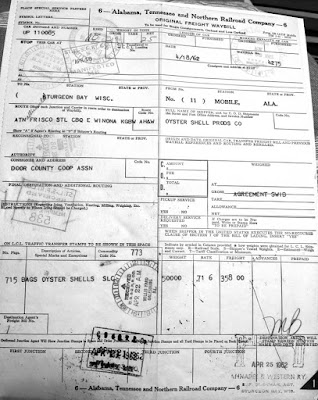 The waybill is interesting in a whole bunch of ways. It’s for a shipment from the Oyster Shell Products Company of Mobile, Alabama, and is being sent to the Door County Coop Association in Sturgeon Bay, Wisconsin. The routing is via AT&N to Aliceville, Alabama (handwritten in) to an interchange with the Frisco, thence to St. Louis and transfer to the CB&Q to take the car to E. Winona, thence across Wisconsin via the KGB&W.

The cargo is interesting in its own right: it's 715 bags of oyster shells (likely intended as soil amendment to decrease acidity). And note, at the right center of the bill, that there appears the typed note, AGREEMENT SWIB, meaning that a weight agreement is in force, issued by the Southern Weighing and Inspection Bureau (WIB).

I have written extensively about weight agreement stamps, but the typed note you see on this AT&N bill, in lieu of a stamp, is not unusual. Likely the AT&N agent knew perfectly well about this agreement and would not have questioned it. Thus the rather round number of the weigh, 50,000 pounds, would have been the basis for the freight charge. And lastly, note that the cargo was loaded into Union Pacific box car 110085, a typical example of a “free-running” box car being used for loading.

The second waybill I want to show is one from the Cincinnati, New Orleans & Texas Pacific (CNO&TP), controlled by the Southern Railway. This is one of those waybills that’s best appreciated in color, because of the varying colors of stamp ink and variety of stamps. The origin is Arvin Industries in Oneida, Tennessee. Note that, like the waybill above, the origin station is preprinted for the agent’s convenience, not typed. And here the full railroad name at top takes two full lines at the chosen type size. 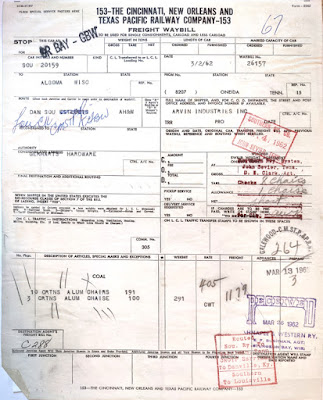 In this bill, one suspects that the cargo could be LCL (less than car load), since it is only 291 pounds weight, and consists of 13 cartons of aluminum furniture. However, it was loaded into Southern box car 20159, and was routed from Oneida to Danville, Kentucky (a short distance), where it was tranferred to the Southern, which took it to Louisville. Routing from there is handwritten in the waybill’s ROUTE box: CIL (Monon), presumably to Chicago, then Milwaukee Road to Green Bay, where it made the usual changes to KGB&W and A&W, ultimately reaching Gerhardt’s Hardware in Algoma.

Lastly, I will include a Western Pacific waybill from Oakland, California, leaving the California Packing Corporation (better known by its brand name, Del Monte). The shipment is only 11,750 pounds, and consists of 250 cases of canned pineapple.

It was shipped in PFE 4816, likely serving as an insulated box car, not as a refrigerator car, since the shipment reached Wisconsin around the first of March. It is destined to Sturgeon Bay, Wisconsin, care of a wholesaler, Griffin and Toohey. At right center you may note a weight agreement stamp from the Trans-Continental Freight Bureau WIB. 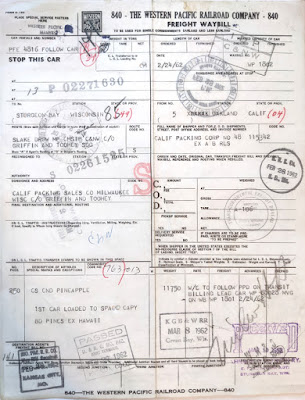 Routing is as one might expect: WP to Salt Lake City, D&RGW to Pueblo, Colorado, there transferred to the Missouri Pacific. Then MoPac to Kansas City and Milwaukee Road to a transfer to Chicago & North Western, perhaps at Racine, Wisconsin (bypassing Chicago), then on to Green Bay. Here again, we see quite a variety of stamps and colors, tempting items for model use.

Thee is also some interesting language in the RATE part of the document, stating that what appears to be a processing-in-transit claim is made, including partial shipment on a car moving on the immediate previous waybill number. Not sure many of us want to duplicate all that, but it’s further information.

I find these prototype waybills endlessly interesting and informative (thanks again, Andy), and feel I almost always learn something from each one. I hope some of the readers of this blog feel the same way.