Operating again! and enjoying it.

This weekend just past I hosted two operating sessions on my layout, in the usual mode with two two-person crews each day. Although I had already had two sessions since the pandemic began to wind down (in late March), meaning that the layout had already emerged from its long hibernation, I still took extensive pains making sure once again that all track was good and clean, locomotive wheels clean, etc., and of course all freight cars had good coupler height and operation — all the usual precautions. I even ran through some switching at most sidings to be completely sure of good operation.

Sigh. Of course I annoyed the layout gods by all those precautions. I should have known better. We did have a couple of electrical glitches that I couldn’t track down, and a track failure too. Luckily my mentor in coping with such surprises, Jim Providenza, was there for the first session and provided excellent philosophical perspective.

During the sessions, we found some work-arounds for the track and electrical bads. In the first session, there were two of them, of which one got fixed, but a new one surfaced in the second session, so they persisted as two separate problems — maybe frog juicers acting up, not at all sure yet. But we got through all the intended operating.

For the first session, present were Jim Providenza, as mentioned, who teamed with Lisa Gorrell, along with Richard Brennan and Adam Palmer. Adam is the guy that made a video of my layout before there was anything else available about my layout, for which I’m still grateful. Shown below are Adam (at left) and Richard working at Shumala. Richard is holding the throttle, so was the engineer in this view, while Adam holds waybills while directing the job as conductor. 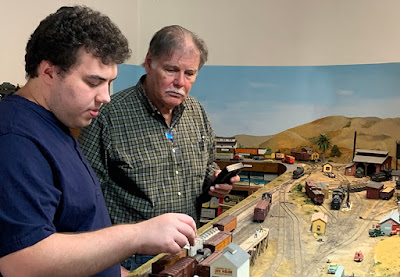 The other crew, Jim and Lisa, are shown below during their stint at Ballard. Jim, at right, has his fingers on the NCE throttle — he was the engineer on this side of the layout — and Lisa was the conductor. I can tell from her intense expression that she must be devising a multi-car move. 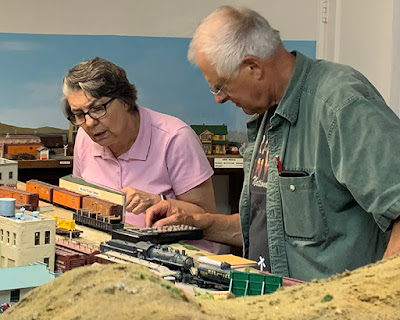 The following day, Sunday, a new pair of crews operated, this time Seth Neumann, Dave Adams, Pat LaTorres, and Jim Radkey. Shown below during their time working at Shumala are Jim, at left, and Pat. Jim must have been the conductor at this point, as he’s holding a couple of waybills. As crews almost always do, these crews exchanged jobs between the two sides of the layout. 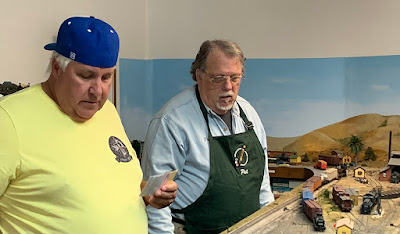 The other two were teamed at the same time on the other side of the layout, and you see them here hard at it, Dave at left and Seth at right. Dave was evidently the engineer, as he’s holding the throttle. Seth looks like he is focused on deciding the next switching sequence. 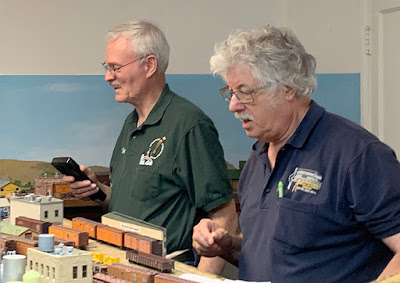 All in all, in spite of the glitches, everyone had fun, and on balance, I think I could say that this went well. A number of homemade chocolate-chip cookies were consumed in both sessions, along with cool water and cold soft drinks (both afternoons were warm), so comforts were adequate too. And just as at my March sessions, we were all very glad to be able to operate again with friends. Here in California, it’s gratifying to see restaurants, theaters, retail stores and libraries returning to normal, and hosting operating sessions fits in perfectly.