Among the very many and very varied loads carried on flat cars, we can include railroad equipment, either as wreck damage or equipment moved on its trucks. This post is about the latter. To illustrate, I show below one of Southern Pacific’s narrow-gauge steam locomotives, Ten-Wheeler no. 9, loaded on a 60-foot flat car (Class F-70-3). This was done with rails spiked to the car deck, lots of blocking, and a few cable ties to stake pockets (R.H.McFarland photo at Owenyo, California, in September 1953, Arnold Menke collection).

The SP narrow-gauge steam power usually received its Class repairs at Bakersfield shop, thus the need to move these locomotives to and from narrow-gauge territory. The shiny paint job here suggests that no. 9 is arriving home from a maintenance trip.

Another example, this one not a tender locomotive like no. 9 above, is Swayne Lumber no. 4, a small two-truck narrow-gauge Shay locomotive. The photo is by R.H. McFarland, Arnold Menke collection, and shows the locomotive on a 40-ton T&NO flat car at Bayshore Yard in 1940, likely on the way to a new owner after Swayne had shut down in 1938.

One possibility to model such locomotive loads on flat cars would be to dedicate a flat car to the load, and thus the rails could actually be spiked and/or glued to the car deck. But if it is to be a removable load, something else needs to be devised. One approach would be a pair of rails, soldered to cross-bars to form a frame. That’s what I did, using Code 70 rail and, for the cross-bars, flat brass bar, 1/64 x 1/32-inch dimension (Special Shapes Co. #05019). Track-laying gauges were used to hold the rail during soldering.

My frame, as you see above, was chosen to have enough length for a 53-foot flat car, though I may also make one for a 40-foot flat. One kind of equipment I can pose on a flat car is an old steam locomotive, presumably for a museum.

In that regard, I happen to have a model of a Caledonian Railway 0-4-4 tank engine. (The Caledonian, a Scottish railway known to her fans as the “Caley” [rhymes with “rally”], was absorbed into the London, Midland and Scottish, or LMR, at the Grouping of 1923. This is therefore a pre-Grouping paint scheme, but it’s worth noting that these durable locomotives, designed by the great J.F. McIntosh,  remained in service well after the formation of British Railways in 1948.)

I show the model locomotive below, on a flat car. This model, a CR 439 class, in the historical “Caley blue” scheme, was built from a DJH kit during the year I lived in England. Scale 6 x 6-inch timbers have been added as wheel blocks.

One can also pose appropriate rolling stock of other kinds. There could be quite a few of these, but I will just show a single example, a brass car with an interior “A” frame for side dumping. It is lettered for a private company and clearly is not intended for interchange. It’s shown here in the same setting as the locomotive above. 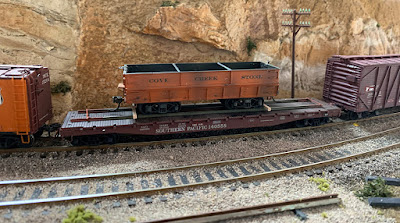 I intend to explore further opportunities for cargoes like these for flat cars. They can certainly be vivid loads, but for that very reason, should not be used too often.

Posted by Tony Thompson at 9:52 AM