In this series of posts about crates as open-car loads, I have described scratchbuilding some large crates, and included some older crates of the same type. The most recent post in the series is at this following link: https://modelingthesp.blogspot.com/2021/06/open-car-loads-crates-part-3.html .

In the present post, I describe work with parts from a Chooch set of molded resin crates, their set 7243. These are often available from on-line sellers. Here is a photo from such a seller, showing the Chooch crates posed on and in front of a model flat car (the flat car isn’t part of the set). 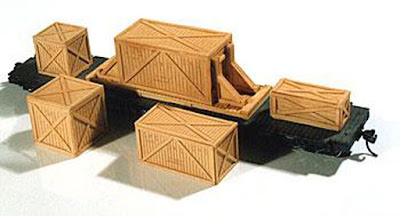 I began with these Chooch moldings by using the two smallest crates as scenery on freight platforms. The three larger ones seemed like good candidates for open-car loads.

As in the previous posts about crates, I applied different signs to each side. The largest crate in the photo above is my first example. The sign is for American Tractor Equipment Company, primarily offering tracked construction equipment, not farm tractors. 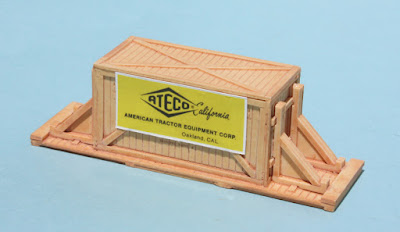 This particular crate molding is probably intended for a flat car, with its extensive bracing, but obviously can work equally well in a gondola. Here is the other side of this crate, with a sign for the Dorr-Oliver company, a well-known producer of process equipment for mining and chemical uses. It is spotted on the team track in my layout town of Santa Rosalia. (You can click on the image to enlarge it, if you would like to examine the sign.) 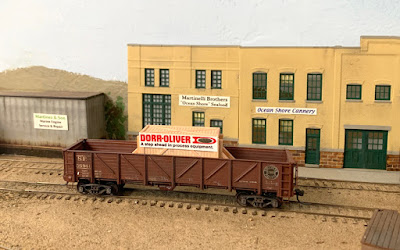 The two next biggest crates could of course be used separately, as they are maybe just big enough to require an open-top car for shipment, but as a twosome, they seem to me more convincing. On one side of both crates, I applied a sign for Clark Equipment, with its Benton Harbor, Michigan site identified. Note that I’ve added a scale 6 x 6-inch timber securement at each end of the larger crate, but had not yet added this to the smaller one. 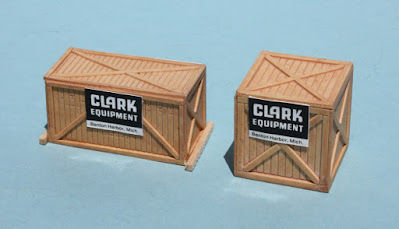 Here again, these two are very suitable for flat cars, but can move equally well in gondolas, as in this example of a Santa Fe Caswell gondola, set out in front of the Shumala depot on my layout. 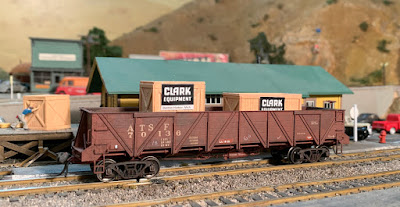 Lastly, there exist photos of multiple crate loads for which the shipper placed a sign on only one of the crates. I’ve done this with this pair (on the other side), using a sign for Dresser Industries. Here the crates ride on my kitbashed SP Class F-50-16 flat car, being switched at Shumala. 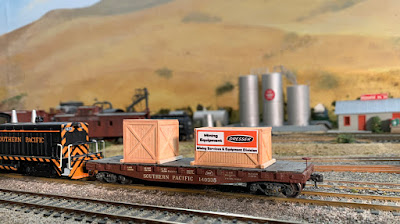 These examples of making use of a commercial set of crate moldings, Chooch in this case, are intended to show what can be done to make crates more interesting and industry-specific, as well as distinctive to your layout.